On the basis of the favorable safety profile from the Phase I studies and preclinical data regarding olaratumab combination with doxorubicin in human sarcoma xenograft models,39,45 Tap et al26performed a multicentric, open-label Phase Ib and randomized Phase II study of doxorubicin alone or doxorubicin plus olaratumab in patients with unresectable or metastatic STSs, previously untreated with an anthracycline.

The enrollment of Phase Ib–Phase II ran from October 2010 to January 2013.

In the Phase Ib part of the study, patients received olaratumab (15 mg/kg) intravenously on day 1 and day 8 plus doxorubicin (75 mg/m2) on day 1 of each 21-day cycle up to eight cycles. After eight cycles of the combination therapy, if no disease progression or unacceptable toxicities occurred, patients were allowed to receive olaratumab monotherapy until disease progression.

In the Phase II part of the study, patients were randomly assigned in a 1:1 ratio to receive either olaratumab (15 mg/kg) plus doxorubicin (as described in the Phase Ib part) or doxorubicin alone (75 mg/m2) on day 1 of each 21-day cycle for up to eight cycles. After completion of eight cycles of doxorubicin, patients in the combination group could receive olaratumab monotherapy until disease progression, while patients in the doxorubicin-alone group were observed and could receive olaratumab monotherapy after disease progression.

The Phase II primary end point was PFS. It was 6.6 months (95% CI 4.1–8.3 months) for patients treated with olaratumab plus doxorubicin and 4.1 months (95% CI 2.8–5.4 months) for those treated with doxorubicin monotherapy. This PFS improvement in favor of the experimental arm met the protocol-defined significance level of 0.1999 for final PFS (stratified HR 0.672, 95% CI 0.442–1.021,p=0.0615). Moreover, the most relevant finding of this study was the significant improvement in OS, which was a secondary end point, for patients treated in the experimental arm: final analysis of OS, performed after 91 (71%) patients had died in the intention-to-treat population, showed a median OS of 26.5 months (95% CI 20.9–31.7 months) with olaratumab plus doxorubicin vs 14.7 months (95% CI 9.2–17.1 months) with doxorubicin, with a gain of 11.8 months (HR 0.46, 95% CI 0.30–0.71,p=0.0003). This impressive benefit was consistent across the subgroup stratification factors, including histological tumor type (leiomyosarcoma vs non-leiomyosarcoma), number of previous treatments, and PDGFRα expression. PDGFRα expression, assessed by immunohistochemistry, did not show any predictive value on efficacy.

An ongoing double-blind, placebo-controlled, randomized Phase III study (ANNOUNCE trial, NCT02451943)49 was planned in order to confirm the survival advantage of olaratumab and to provide definitive drug confirmation by regulators. The primary end point of the study was OS, with an enrolled population of 460 patients. From August 2015 to June 2017, patients with unresectable or metastatic STSs were randomized to receive olaratumab plus doxorubicin vs placebo plus doxorubicin, with the same schedule used in the Phase II trial. The study is still ongoing, but the enrollment is closed. The first efficacy results are expected in 2019, and the study is expected to be completed in 2020. The Phase III ANNOUNCE study will enroll a higher number of patients compared with the Phase Ib/II trial, which will make the study more powerful and may help to detect tissue biomarkers to predict survival in treated patients. Preliminary data from post hoc biomarker analysis failed to identify a significant association between PDGFRα or PDGFRβ expression and OS or PFS in patients included in Tap et al’s Phase Ib/II study of doxorubicin with or without olaratumab. Low PDGF-BB or CXCR4 expression was associated with improved PFS in the combination arm.50

Several other trials are evaluating efficacy and safety of olaratumab in STS patients and are listed in Table 1. 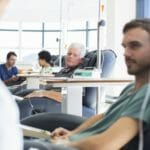