Abstract: Lartruvo® (olaratumab) is a fully human immunoglobulin G subclass 1 (IgG1) monoclonal antibody that inhibits platelet-derived growth factor receptor alpha (PDGFRα). The antitumor activity of olaratumab has been tested in vitro and in vivo, and inhibition of tumor growth has been observed in cancer cell lines, including glioblastoma and leiomyosarcoma cells. It represents the first-in-class antibody to be approved by regulatory authorities for the treatment of advanced soft-tissue sarcomas (STSs) in combination with doxorubicin, based on the results of the Phase Ib/II trial by Tap et al. The median progression-free survival (PFS), which was the primary end point of the study, was improved for patients treated with olaratumab plus doxorubicin compared to those treated with doxorubicin monotherapy (6.6 vs 4.1 months, respectively; HR 0.672, 95% CI 0.442–1.021, p=0.0615). Moreover, final analysis of overall survival (OS) showed a median OS of 26.5 months with olaratumab plus doxorubicin vs 14.7 months with doxorubicin, with a gain of 11.8 months (HR 0.46, 95% CI 0.30–0.71, p=0.0003). In October 2016, olaratumab was admitted in the Accelerated Approval Program by the US Food and Drug Administration (FDA) for use in combination with doxorubicin for the treatment of adult patients with STSs. In November 2016, the European Medicines Agency (EMA) granted conditional approval for olaratumab in the same indication under its Accelerated Assessment Program. A double-blind, placebo-controlled, randomized Phase III study (ANNOUNCE trial, NCT02451943) is being performed in order to confirm the survival advantage of olaratumab and to provide definitive drug confirmation by regulators. The study is ongoing, but enrollment is closed. The purpose of this review was to evaluate the rationale of olaratumab in the treatment of advanced STSs and its emerging role in clinical practice.
Keywords: anti-PDGFR antibodies, soft-tissue sarcoma, PDGFRα, doxorubicin, olaratumab

Soft-tissue sarcomas (STSs) represent a group of rare mesenchymal tumors derived from connective tissues,1 which can arise from any site within the body, such as extremities, retroperitoneum, uterus, trunk, and head and neck.

Management of STSs requires a multidisciplinary approach including surgery, radiotherapy, and chemotherapy.

To date, anthracyclines (doxorubicin and epirubicin) remain the standard of care for first-line therapy of high-grade advanced STSs, regardless of histological subtype, clinical presentation, and patients’ characteristics.4

For advanced or metastatic disease, palliative chemotherapy determines an advantage in overall survival (OS) with median OS of 12–18 months for patients treated with first-line anthracycline-based regimes.5–8

Several clinical trials compared doxorubicin monotherapy and combinations of doxorubicin and other drugs, such as ifosfamide, showing a significant increase in terms of response rates (RRs) and progression-free survival (PFS) but failing to show an improvement in OS.9,10

Moreover, newer studies such as the PICASSO III and the TH CR-406/SARC021 trials have compared doxorubicin alone to doxorubicin in combination with recently developed fosfamides, palifosfamide and evofosfamide, respectively. No benefit in terms of OS and PFS was found in favor of the combinations, but the median OS of patients treated with doxorubicin in monotherapy has improved from 12 months to ~16 months in PICASSO III and 19.0 months in TH CR-406/SARC021.11,12

Targeted therapies play an emerging role in STS treatment, following discovery of molecular patterns involved in tumor biology. For example, upon detection of somatostatin receptor subtypes13 in intermediate and malignant soft tissue tumors,14 initial cases of patients with multiple drug-resistant, metastatic STSs successfully treated with radiolabeled somatostatin analogs have been recently reported.15 However, these agents are not approved.

Overexpression or aberrant activation of this receptor has been demonstrated on both tumor cells and stroma.18 Several preclinical and clinical data suggest that PDGFR–ligand binding could play a significant role in stemness, senescence, and apoptosis in sarcoma cells and is also associated with metastatic progression.19 PDGFR amplification and activating mutations have also been found in gastrointestinal stromal tumor (GIST).20

Several tyrosine kinase inhibitors, blocking also platelet-derived growth factor receptor alpha (PDGFRα), such as pazopanib, regorafenib, sunitinib, and sorafenib, have been evaluated in advanced STSs; however, in all these studies, the median PFS ranged from 1.8 to 3.2 months, which did not differ from PFS associated with cytotoxic monotherapy.21–23

To date, pazopanib, a multikinase tyrosine kinase inhibitor that targets multiple receptors, including vascular endothelial growth factor (VEGF), PDGFR, and c-KIT, is the only US Food and Drug Administration (FDA)- and European Medicines Agency (EMA)-approved oral agent for high-grade STSs, on the basis of the results of the multi-institutional, Phase III PALETTE trial, that randomized 369 pretreated, metastatic STS (excluding liposarcoma) patients 2:1 to pazopanib vs placebo. Pazopanib improved median PFS (4.6 vs 1.6 months, HR 0.31, 95% CI 0.24–0.40, p<0.001) compared with placebo, even if no differences in terms of OS were observed.24

An in vitro study also showed that PDGFR overexpression represents a negative prognostic marker for survival in STS patients: the median OS in patients with a high vs low expression of PDGFRα was 27 vs 91 months, respectively.25 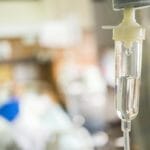