Body composition and pelvic fat distribution may be correlated with cancer aggressiveness and recurrence in patients with localized prostate cancer, according to study results. These findings were reported in the journal Medicine (Baltimore).

Obesity is among the risk factors for prostate cancer, and some evidence has pointed to a greater rate of biochemical recurrence (BCR) of prostate cancer in patients with obesity. “Fat tissue is metabolically active and thought to play a major role in prostate carcinogenesis,” the study investigators wrote in their report.

The study was based at the Linkou Chang Gung Memorial Hospital in Taoyuan City, Taiwan, and included patients with a diagnosis of localized prostate cancer. Patients were being treated with robot-assisted radical prostatectomy (RaRP) at the hospital after receiving a pretreatment magnetic resonance imaging (MRI) scan of the pelvis. The researchers used these pretreatment scans to determine cancer stage, body composition, and fat distribution. They also analyzed patient and tumor characteristics from patients’ medical records.

A higher iPSA level demonstrated significant associations with higher BMI (P =.027), as well as higher pelvic fat volume (P =.004) and higher perirectal fat volume (P =.001). However, among these measures, only BMI showed a significant association with the Gleason score (P =.011). A high periprostatic fat volume was linked to tumor extracapsular extension, which is a feature related to locally advanced disease (P =.047).

Additionally, there was a significant relationship between a reduced subcutaneous fat thickness, less than 2.4 cm, and poor BCR-free survival (P =.039). This was the only body composition factor that the researchers found to be associated with poor BCR-free survival. The researchers highlighted the presence of an obesity paradox in some other studies of prostate cancer, suggesting possible complexities in the relationship between prostate cancer and obesity.

Regarding prostate cancer aggressiveness, the researchers concluded that this feature was linked to high BMI and greater fat volume in the pelvic, perirectal, and periprostate areas, but that BCR showed a different pattern. “Patients with less subcutaneous fat experienced significantly poor BCR–free survival after RaRP, whereas BMI and other body composition factors were not significantly correlated with BCR,” they concluded. 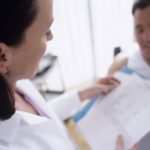