Docetaxel should be added at initiation of standard of care treatment in men with prostate cancer; however, no evidence of survival improvement was seen with zoledronic acid therefore it is not recommended as part of standard of care for this patient population. These results were published online first in the journal The Lancet.

Standard of care was hormone therapy for 2 years; men with N0M0 disease were encouraged, then mandated after November 2011, to undergo radiotherapy. Men with node-positive nonmetastatic (N+M0) disease were offered optional radiotherapy. Zoledronic acid (4 mg) was given for 6 3-weekly cycles, then 4-weekly until 2 years. Docetaxel (75 mg/m2) was given for 6 3-weekly cycles with prednisolone 10 mg daily. Treatment allocation was not blinded. Primary outcome measure was overall survival.

No evidence of survival improvement was seen with zoledronic acid, and the researchers therefore do not recommend including it in standard of care. However, survival improvement was seen with adding docetaxel at initiation of long-term hormone therapy. Although this was accompanied with an increase in adverse events, the researchers recommend including docetaxel as part of the standard of care for appropriately selected patients. 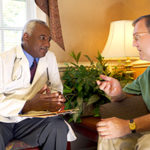