The FDA has accepted a New Drug Application (NDA) for, and granted Priority Review to, darolutamide for the treatment of nonmetastatic castration-resistant prostate cancer (nmCRPC).1

Darolutamide is an investigational, nonsteroidal androgen receptor antagonist with a distinct chemical structure that binds to the receptor, inhibiting the growth of prostate cancer cells.

The acceptance of the NDA and granting of Priority Review status were based on data from the phase 3 ARAMIS (Androgen Receptor Antagonizing Agent for Metastasis-free Survival) trial, which enrolled 1509 men with nmCPRC. Investigators randomly assigned men to receive 600 mg of darolutamide twice daily (955 men) or placebo (554 men) along with androgen deprivation therapy. The median metastasis-free survival was 40.4 months among darolutamide-treated patients compared with 18.4 months in the placebo arm. Compared with placebo recipients, the darolutamide group had a significant 59% decreased risk for metastasis or death, according to ARAMIS study findings published in the New England Journal of Medicine.2

Darolutamide treatment also was associated with improved overall survival, time to pain progression, time to cytotoxic chemotherapy, and time to a symptomatic skeletal event. Adverse event (AE) rates were similar between study arms. The proportion of patients who discontinued their assigned treatment because of adverse events was 8.9% in the darolutamide group and 8.7% in the placebo group, a nonsignificant difference.

ARAMIS (ClinicalTrials.gov number, NCT02200614) was funded by Bayer HealthCare and Orion Pharma, which are developing darolutamide. 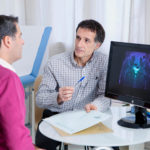