In a study of 59 prostate specimens from men who underwent radical prostatectomy and fulfilled criteria for focal ablation (FA), a team at New York University School of Medicine led by Herbert Lepor, MD, found that 15 (25.4%) specimens had at least 1 Gleason pattern 4 extra-focal disease (GP4EFD). This was defined as PCa with any Gleason pattern 4 not detected by mpMRI and transrectal ultrasound systemic biopsy but which was observed outside a specified ablation zone.

Of the 20 GP4EFD, 10 (50%) exhibited a maximum linear cross-sectional length of less than 5 mm. Ablating only the MRI-L lesion plus 10 mm or performing an ipsilateral hemi-ablation would leave residual Gleason pattern 4 tissue in 14 (23.7%) and 11 (18.6%) of the 59 patients, respectively, Dr Lepor’s group reported online ahead of print in Urology.

“While encouraging and perhaps oncologically acceptable, these data indicate that men undergoing an ablation template that includes the MRI-L + 10 mm margin or hemi-ablation must be followed with an active surveillance protocol after FA,” Dr Lepor and his colleagues wrote. “The frequency with which MRI and biopsy are conducted in follow-up remains a matter of active debate.”

Jennifer B. Gordetsky, MD, associate professor of surgical pathology at the University of Alabama at Birmingham, who was not involved in the new study, said the study by Dr Lepor and colleagues demonstrated that prostate MRI is highly accurate in predicting the index lesion, as defined by the highest grade/highest volume tumor, which was successfully predicted in more than 90% of cases. Similar to other studies, the authors found that the majority (72.9%) of patients in their study had multifocal PCa, which can be problematic for patients undergoing focal therapy, said Dr Gordetsky, who has studied the use of mpMRI/ultrasound fusion-guided biopsy and its application to PCa focal therapy.

“It is also well known that prostate MRI is not as sensitive in detecting small volume tumors, some of which will harbor clinically significant disease,” Dr Gordetsky told Renal & Urology News. “As such, this study is in line with the current literature that demonstrates a small but significant number of patients undergoing focal therapy will be left with potentially clinically significant prostate cancer. Focal therapy should not be considered a curative approach for prostate cancer and those undergoing this procedure require continued surveillance and repeat MRI-targeted prostate biopsy.” 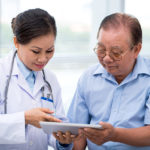