Abstract: Typical survival with common 1st-line regimens for pancreatic cancer range from 6-11 months. We report a case of a patient with stage IVB pancreatic adenocarcinoma treated with gemcitabine and erlotinib who stopped therapy after 3 months without achieving a response due to intolerance. To decide upon additional treatment options, molecular analysis was performed on liver metastasis which revealed KRAS, FBXW7, APC, and ATM mutations, with thymidylate synthase (TS) negativity and PD-1 positivity. Based on this profile of TS negativity and ATM mutation, a combination strategy was devised consisting of capecitabine, oxaliplatin, bevacizumab and vorinostat. The patient had a near complete response to therapy with this regimen. In refractory metastatic pancreatic cancer, responses of this magnitude are rarely seen. To our knowledge, this represents the first demonstrated activity of this combination in the metastatic setting which could prompt further investigation of its use in large scale clinical trials.

A 62-year-old Iranian male without significant past medical history presented with weight loss and painless jaundice in November 2013. A CT scan of the chest, abdomen and pelvis identified multiple liver masses and a presumptive pancreatic mass. He underwent endoscopic retrograde cholangiopancreatography (ERCP) and had a metallic stent placed with marked improvement of his symptoms. CT-guided biopsy of the liver mass was performed and pathology was consistent with moderately differentiated adenocarcinoma, morphologically consistent with metastatic spread from a pancreatic primary (stage IVB).

The patient was started on palliative chemotherapy with gemcitabine and erlotinib by his primary oncologist in February 2014 based on Moore et al. (1). In March 2014, the patient developed severe nausea and vomiting due to cholecystitis and underwent cholecystectomy. Repeat CT scan in April 2014 showed stable disease, however due to persistent severe side effects, gemcitabine and erlotinib were discontinued in mid-May 2014. The patient continued to report progressive fatigue, weight loss and anorexia associated with right upper quadrant and epigastric discomfort. PET/CT 1 month after stopping therapy revealed greater than 20 hypermetabolic liver masses in both lobes, the largest measuring within 4-5 cm, a 5.7 cm × 5 cm pancreatic head mass, and retroperitoneal lymph nodes (Figure 1). Multi-modal molecular profiling of the tumor specimen collected on January 9, 2014 was performed at this time, (Caris Molecular Intelligence®, Irving, TX) and revealed the following alterations detailed in Table 1. Interpretation of these findings suggested a likely benefit of capecitabine due to the thymidylate synthase (TS) negativity and or possible response to histone deacetylase inhibitors (HDACi) such as vorinostat based on the ATM mutation. Based on this molecular profile, the treating physician instituted therapy with capecitabine, oxaliplatin and bevacizumab with the addition of vorinostat. After six cycles of therapy, laboratory evaluation revealed improvement in liver function, and marked decline in CEA from 115 to 8 mcg/L and CA 19-9 from 80,000 to 1,525 U/mL. Repeat PET/CT imaging in November 2014 revealed a greater than 50% decrease in the size of the pancreatic head lesion to 2.5 cm × 2.5 cm, with a corresponding decrease in PET avidity. Additionally, there was complete resolution of the previously noted hepatic metastases as well as the retroperitoneal lymphadenopathy (Figure 2). This represents at least an 80-90% response to current therapy by PET/CT. 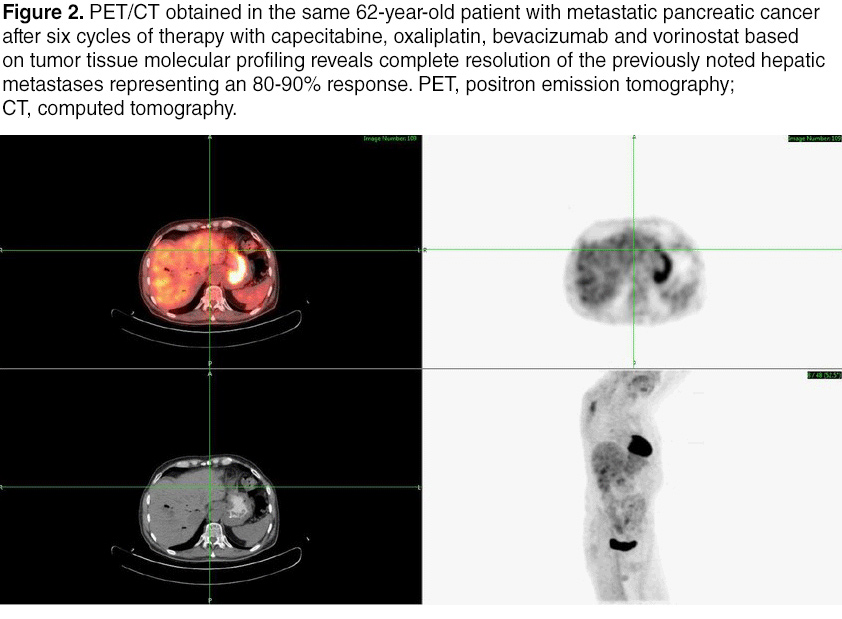