A family history of pancreatic cancer is typically a prerequisite for patients to be eligible to have their exome sequenced to reveal the presence or absence of cancer predisposition genes. But researchers from the Mayo Clinic are now calling for the genetic testing of all pancreatic cancer patients, regardless of the existence of the disease across a patient’s lineage.

Up to 90% of pancreatic cancers are at risk of being missed as a result of current genetic testing guidelines, insists investigators from the Mayo Clinic.1 They suggest all patients with pancreatic cancer — not just those who are aware of previous instances of disease — should be screened for common germline mutations.

In data published in JAMA, investigators from the clinic conducted a case-control study of 3030 pancreatic cancer patients.2  They compared sequencing information from biospecimens of these patients against data from the Genome Aggregation Database and Exome Aggregation Consortium in an attempt to confirm which genes confer susceptibility to pancreatic cancer.

They found germline mutations in coding regions of 21 candidate cancer predisposition genes, with six specific mutations (CDKN2A, TP53, MLH1, BRCA2, ATM, and BRCA1) found in 5.5% of pancreatic cancer patients. These mutations existed in 7.9% of patients with a known family history of the disease and 5.2% of patients with no prior history of disease.

The study harnessed a DNA custom gene panel called QIAseq, which looked at the coding regions of DNA associated with cancer predisposition genes (this is via exome sequencing, as opposed to whole-genome sequencing [WGS]).

The researchers acknowledged that this testing method relying on “molecular barcodes” could be a study limitation, as it only captures a snapshot of the genome: “…[T]he custom panel of 21 genes used in this study did not account for all predisposition genes, and the possibility remains that other untested genes may contribute to risk of pancreatic cancer,” the researchers wrote.2 But, lead researcher Fergus Couch, PhD, consultant at the department of laboratory medicine and pathology at the Mayo Clinic, told Cancer Therapy Advisor that his team’s results would not likely have changed had the group used whole-genome sequencing “because it is unlikely that any of the additional genes would be associated with pancreatic cancer risk.”

Raed Samara, senior global product manager at QIAGEN, told Cancer Therapy Advisor that while WGS can be used for such types of studies, it wouldn’t be an “economically feasible [option] at the depth of coverage achieved.” Samara added, “Whole-genome sequencing for each sample could cost about $1000 — a focused panel like the one we designed for this study generates highly relevant data more economically, as 768 samples can be sequenced together.”

In addition, another important limitation was that because nearly 96% of participants included in the study identified as white, they were not a representative sample of the patients that are included in the Surveillance, Epidemiology, and End Results registry — meaning the study’s findings “may lack generalizability.”

Dr Couch acknowledged that the frequencies of mutations in genes may vary slightly in different populations. But, he said, “there is no evidence to date that the level of risk associated with each gene would be substantially different in various populations. However, additional studies are needed to verify that.” 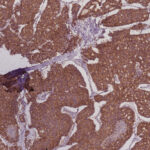