Hyperthermic intraperitoneal chemotherapy (HIPEC) did not have an effect on health-related quality of life (HRQOL) in patients with primary ovarian cancer who had undergone cytoreductive surgery. These findings were published in the Journal of Gynecologic Oncology.

Ovarian cancers are typically diagnosed at an advanced stage. Although many patients respond to treatment, recurrence rates are high. HIPEC has been shown to improve progression-free and overall survival among patients who had undergone interval cytoreductive surgery; however, its effect on HRQOL remain poorly understood.

A major limitation of this study was that short-term HRQOL was not evaluated.

These data indicated that HIPEC following cytoreductive surgery did not affect HRQOL compared with surgery alone and that HIPEC could be considered a primary treatment option for stage III-IV epithelial ovarian cancer. 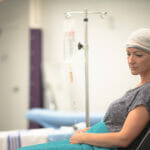