An oral tablet form of a PARP inhibitor, olaparib, given in combination with chemotherapy, was safe in heavily pretreated ovarian cancer patients, and patients with BRCA mutations may have a better response compared with those without a BRCA mutation, according to phase Ib clinical trial data presented at the Marsha Rivkin Center for Ovarian Cancer Research-AACR 10th Biennial Ovarian Cancer Research Symposium.

“This study is one of the first studies to use olaparib tablets instead of olaparib capsules,” said Saul Rivkin, MD, founder and chairman of the Marsha Rivkin Center for Ovarian Cancer Research, and a research scientist at the Swedish Cancer Institute, both in Seattle, Washington. 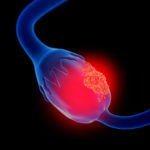