“Surgery is the most important treatment for ovarian cancer, and surgeons mainly have to rely on their naked eyes to identify tumor tissue, which is not optimal,” explained Alexander L. Vahrmeijer, MD, PhD, head of the image-guided surgery group in the Department of Surgery at Leiden University Medical Center, The Netherlands, and senior author of this study. Near infrared (NIR) fluorescence imaging is a novel technique that can improve visualization of tumors during surgery.

OTL38, a new fluorescent molecule, is a conjugate of NIR fluorescent dye and an analog of folate. It binds to folate receptor-alpha (FRα), a receptor expressed in more than 90% of ovarian tumors but at low levels in healthy tissues.

Researchers assessed the safety and pharmacokinetics of OTL38 in a randomized, double-blind, placebo-controlled clinical trial with 30 healthy volunteers. The trial enabled researchers to determine the best dose range and time window for intraoperative imaging.

OTL38 was then used in 12 patients with ovarian cancer, assessing safety and pharmacokinetics. Researchers also examined whether more tumors that were not visible or palpable were detected in OTL38-guided surgery.

Study results revealed OTL38 accumulated in FRα-positive tumors and metastases, allowing surgeons to remove 29% more malignancies than would have been detected through sight and palpation. This study did not estimate the sensitivity or specificity of the OTL38-guided imaging system. A larger study to determine the sensitivity and specificity of this approach is being planned, as well as development of fluorescent agents for tumors that do not express FRα.

One study limitation Vahrmeijer reported is that the impact of these findings on cure or survival is not yet known. A reasonably plausible assumption is that survival will be better if more cancer is removed; however, long-term studies with large patient groups are needed to prove this effect. 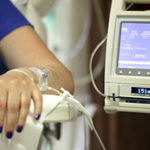 Chemotherapy Boosts Effectiveness of Immunotherapy in the Treatment of Ovarian Cancer