Patients with splanchnic vein thrombosis (SVT) as a presenting condition of polycythemia vera (PV) or essential thrombocythemia (ET) had a higher risk of death compared with those without SVT at the time of PV or ET diagnosis, according to results of a retrospective study published in Annals of Hematology.

The Philadelphia chromosome-negative myeloproliferative neoplasms (MPNs), including PV, ET, and primary myelofibrosis (PMF), are a group of hematopoietic stem cell disorders that result in an overproduction of red blood cells, white cells, and/or platelets. All 3 of these conditions are characterized by an increased risk of thrombosis, a major cause of morbidity in patients with these diseases.

Rarely, patients with MPN present with thrombosis in splanchnic veins, which supply blood to the gastrointestinal tract, liver, spleen, and pancreas.

Results of previous studies have shown that patients with MPN presenting with SVT are more likely to be younger and to have disease characterized by specific features, such as a slower rate of disease progression. These findings suggest that PV and ET in patients presenting with SVT may be a biologically distinct entity associated with a specific natural history.

In this study, 113 patients with SVT at the initial presentation of PV or ET were identified in 2 Spanish registries that included 1831 and 1304 patients with PV and ET, respectively, as well as a separate registry of 926 patients with MPN. The remaining patients with PV or ET (n=3587), including those patients who developed SVT following diagnosis of MPN, comprised the control group. The primary study outcome was survival, with secondary outcomes including thrombosis, bleeding, disease progression, and second cancer.

The median ages of patients of the cases and controls were 42 years and 65 years, respectively (P =.0001). Those presenting with SVT were significantly more likely to be diagnosed with PV compared with ET or an unclassified MPN (P <.0001), and to have lower hemoglobin levels (P =.0004), and higher leukocyte (P =.0004), and lower platelet counts (P =.0004) at diagnosis. 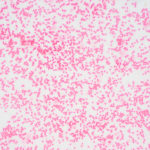