A retrospective study of patients with myeloproliferative neoplasms (MPNs) provided evidence to support use of the combination of red blood cell (RBC) count and erythrocyte sedimentation rate (ESR) over either the hemoglobin level or the hematocrit value in the diagnosis and monitoring of patients with polycythemia vera (PV).  The findings from this study were published in the European Journal of Haematology.

Although the WHO 2008 and 2016 diagnostic criteria for PV include elevated hemoglobin concentration levels in addition to the presence of a JAK2 mutation, controversy exists regarding the utility of the former criterion since it may be affected by PV-related iron deficiency, leading to falsely normal hemoglobin levels.

The hematocrit value, which is based on both the RBC count and the mean cell volume (MCV), has been suggested as an alternative to hemoglobin level in the diagnosis of PV. However, previous studies have provided evidence that iron deficiency-related microcytosis, which decreases the MCV, can falsely lower the hematocrit level. Conversely, hydroxyurea-related increases in MCV occurring during treatment of PV can potentially lead to unnecessary phlebotomy when the hematocrit value is used in the monitoring of patients with this disease.

Some of the aims of this study were to evaluate the correlation between hematocrit value and RBC count in the setting microcytosis in a population of patients with PV and essential thrombocythemia (ET). In addition, the usefulness of ESR as a criterion for the diagnosis of PV was also evaluated.

Of the 182 patients from a single hematologic center included in this study, 39 had a diagnosis of PV, 27 had a diagnosis of ET, and 116 were classified as having a disease suspicious of MPN who were subsequently diagnosed with secondary erythrocytosis and secondary thrombocytosis (ie, MPN suspects).

Some of the key findings of this study were median hemoglobin concentrations of 185 g/L and 171 g/L in patients with PV and MPN suspects, respectively. Median hematocrit levels were similar in these 2 populations of patients: 0.55 and 0.5, respectively, although median ferritin levels were 44 µg/L and 110 µg/L in the 2 subgroups, respectively. 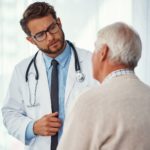