The prognostic accuracy of an online tool was supported using a cohort of real-life patients with essential thrombocythemia (ET), according to study findings published in the British Journal of Haematology.

The Philadelphia chromosome-negative myeloproliferative neoplasms (MPNs), including ET, polycythemia vera (PV), and myelofibrosis (MF), are characterized by the clonal proliferation of one or more mature cell types from myeloid lineages, such as erythrocytes, granulocytes, and/or platelets.

The different types of MPN are primarily distinguished according to clinical and laboratory criteria, yet less is known about the underlying biologic characteristics of these diseases. Although mutations in JAK2, CALR, and/or MPL are frequently identified in MPNs, more comprehensive genomic profiling has revealed a wide range of additional driver mutations in patients with MPNs.

The previously developed MPN Genomic Calculator is a freely available online research tool that was designed to incorporate clinical, laboratory, and genomic characteristics to facilitate prediction of clinical outcomes for individual patients with MPNs.2,3

In this study, the prognostic accuracy of the MPN Genomic Calculator was evaluated using a real-life group of young (younger than 60 years) patients with ET. Data related to OS, event-free survival (EFS), and progression to MF or acute myeloid leukemia (AML), as well as established driver mutations, for these patients had been collected as part of an observational cohort study conducted in Brest, France (ClinicalTrials.gov Identifier: NCT02897297).

Of the 165 patients with ET included in the analysis, 101 (61.2%) were female and median patient age was 49.5 years. Approximately three-quarters of patients had received treatment with cytoreductive therapy.

The only investigated clinical outcome showing a significant difference when the observed and calculated values were compared was the median EFS, which was 25.8 years (observed) vs 20 years (calculated; P =.002).

“When the calculator was used for the young ET cohort, we found strong predictions for transformation and OS and a significant difference in the predicted EFS compared to that of the real-life population,” concluded the study authors.

“Further specific population studies should be performed to fully test this new scoring system,” they added. 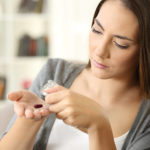 Cutaneous AEs Are Common in Patients With MPNs Treated With Hydroxyurea