Prognosis and survival rates have improved substantially in recent years for patients with multiple myeloma; however, survival improvements do not apply equally to all subgroups, most notably high-risk subgroups.

They found that across both cohorts, 18%, 41%, and 37% were high-risk according to the R-ISS, ISS, and high-risk CA criteria, respectively. Triplets were the most common regimens used across all risk stratification criteria, with 60% of patients treated with these regimens.

They also recommend all patients should be assessed thoroughly to be classified by the R-ISS criteria.

Study limitations included data limitations from using the Flatiron data. These data limitations prevented the researchers from completely ascertaining treatment that began in settings other than the outpatient clinic. The results also may not be generalizable to patients who were treated in inpatient settings in countries outside the United States. 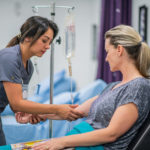