Results from a retrospective study of patients with multiple myeloma demonstrated that a hematologic score was an independent predictor of patient outcome. The findings from this study were published in the American Journal of Hematology.

Several scoring systems, such as the Revised International Staging System (R-ISS), which is derived from a combination of serum albumin, beta 2 microglobulin, lactate dehydrogenase, and cytogenetic abnormalities, are used to risk stratify patients with multiple myeloma and to provide prognostic information for these patients.

Anemia is common in patients in multiple myeloma, and thrombocytopenia occurs to a lesser extent. However, the underlying cause of hematopoietic suppression in this disease is believed to be more than just the consequence of bone marrow infiltration by plasma cells, and may also be associated with other changes in the bone marrow microenvironment induced by these malignant cells.

In this study involving patients with newly diagnosed multiple myeloma seen at the Mayo Clinic between 2004 and 2018, a hematologic score, based on mean corpuscular volume (MCV) greater than 96 fL, hemoglobin level less than 10 g/dL, and platelet count less than 150 × 109/L, was evaluated for its ability to predict survival in these patients. Patients were assigned a hematologic score of 0 to 3 based on each variable, and the overall score was subsequently evaluated for its ability to predict clinical outcomes.

“Hematopoietic parameters available on a CBC can be incorporated in to a scoring system that predicts survival in patients with newly diagnosed myeloma. This is likely to reflect alterations in the bone marrow microenvironment of patients with myeloma that reflects the aggressiveness of the disease,” commented the study authors in their concluding remarks.

However, they also cautioned that “this scoring system needs to be validated in other cohorts to confirm its prognostic value.” 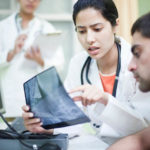