Ixazomib, a new proteasome inhibitor (PI), is a third option for the treatment of relapsed/refractory multiple myeloma. The new agent offers the potential of improved efficacy and the convenience of oral therapy, according to a report in Therapeutic Advances in Hematology.

Bortezomib was the first in class PI and serves a backbone to first-line treatment of multiple myeloma. However, despite its efficacy, use of bortezomib is limited due to toxicities, most notably peripheral neuropathy. Second-generation PIs aim to continue the efficacy of these agents while reducing their neurotoxicity. Carfilzomib represented significant progress toward that goal. But although incidence of peripheral neuropathy was reduced with carfilzomib, other toxicities – including thrombocytopenia, lymphopenia, herpetic zoster reactivation, and fatigue – still occurred, with cardiotoxicity manifesting in a small number of patients.

Ixazomib is a reversible boronate-containing PI. As proteasomes are highly concentrated in red blood cells, PIs tend to get trapped in circulation, potentially rendering them less effective in solid tumors. Ixazomib is structured to dissociate from proteasomes sixfold faster than bortezomib, leading to improved drug activity outside the circulatory system. In comparison studies with bortezomib, ixazomib demonstrated stronger capacity to promote tumor regression, improve survival, and provide better protection against osteolytic bone disease in mouse studies.

In two phase 1 clinical trials, once weekly dosing and twice weekly dosing were evaluated. The two trials had similar enrollment criteria, resulting in similar characteristics among the cohorts. Response rates, likewise, were also similar. In both trials, thrombocytopenia and gastrointestinal toxicity were prevalent adverse events, with a higher incidence of fatigue and rash in the twice weekly regimen.

In phase 2 clinical trials, however, patient populations were different in that a large proportion of patients were PI-naïve, with relapsing disease after at least one prior line of therapy. In addition, phase I trials evaluated ixazomib as a single agent, whereas phase 2 trials added dexamethasone to the regimen for patients demonstrating a suboptimal response to initial single-agent therapy, and ixazomib dose was higher in the phase 2 trial. These differences may have influenced study results as complete and partial response rates were similar to early studies of bortezomib/dexamethasone and significantly inferior to current studies of that combination, suggesting that ixazomib may not be the more effective PI.

Phase 3 study results demonstrated improved survival in patients with relapsed/refractory multiple myeloma who had measureable disease after 1 to 3 prior lines of therapy. In this study, patients were randomized to lenalidomide and dexamethasone combined with either ixazomib or placebo. Progression-free survival was 21.4 months in the ixazomib arm vs 9.7 months in the placebo arm, with overall response rates relatively the same (78% vs 72%, respectively) but depth of response higher in the ixazomib arm vs the placebo arm (very good partial response or better with ixazomib vs placebo [48% vs 39%]).

Although grade 3 or higher thrombocytopenia was more prevalent with ixazomib, as in the earlier trials, neutropenia was the more common higher grade adverse effect and equally present in both study arms. However, peripheral neuropathy of any grade occurred more often in the ixazomib arm (27% vs 22% in the placebo arm). The researchers note that this study emphasized the utility of ixazomib, and further demonstrated the benefits of an all-oral treatment regimen.

Lastly, ongoing studies are exploring the feasibility of ixazomib in maintenance therapy. The advantages of ixazomib being orally bioavailable and its improved efficacy, especially in patients with MM with high-risk features, make ixazomib a good option for patients in the maintenance setting, the researchers said.

In their Report, Drs Brayer and Baz conclude that ixazomib, a third PI approved for the treatment of multiple myeloma, offers the potential of improved efficacy and acceptable toxicity profile, notably less peripheral neuropathy. Furthermore, as an orally dosed agent, it has potential in the maintenance setting and in the elderly and frail who may have limited ability to attend multiple clinic appointments for parenteral agents. 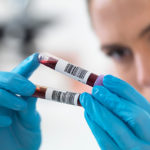 Type and Crossmatch Needed Before Initiating Treatment With Daratumumab