Clarithromycin plus bortezomib does not confer any additional efficacy and is a toxic combination among patients with multiple myeloma (MM), according to a study published in Experimental Hematology & Oncology.

Evidence from previous studies suggested that clarithromycin may lead to synergistic effects in treatment regimens with immunomodulatory drugs for MM, such as lenalidomide plus dexamethasone, but there is a lack of data supporting actual clinical efficacy.

For this phase 2 study, researchers randomly assigned 58 newly diagnosed patients with MM receiving bortezomib, cyclophosphamide, and dexamethasone (VCD) to clarithromycin or placebo arms. Only patients who were eligible for high-dose melphalan with stem cell support were included in the study.

The study was designed to have a total enrollment of 160 patients, but was prematurely terminated after 58 patients due to safety reasons.

Patients in the clarithromycin group also reported having more clinically relevant neurotoxicity, as well as reduced global quality of life.

The authors concluded that “our data do not indicate any additional effect of clarithromycin when added to the VCD regimen, and due to treatment toxicity our trial does not encourage further clinical studies on the combination of clarithromycin and bortezomib.” 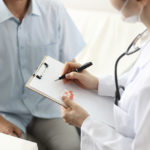