An international research team examined patterns in the development of melanoma in patients in Australia and the United Kingdom and shed light on possible relationships by anatomical site. They reported their findings in the British Journal of Dermatology.

The researchers described in their report 2 major proposed pathways for the development of melanoma, forming a “dual pathway hypothesis” that combines these. One is a nevus pathway thought to be influenced by early-life sun exposure on melanocytes and other factors linked to melanoma occurring on less frequently sun-exposed areas of the body. The other pathway is thought to be related to chronic sun exposure, with associated melanoma occurring on areas that are more regularly sun exposed.

In this analysis, the researchers evaluated 2617 people with newly diagnosed melanoma (cases) and 975 control participants who did not have melanoma. Cases and controls were participants in either the Australian Melanoma Family Study or the Leeds Melanoma Case-Control Study. The researchers examined pigmentary and nevus characteristics, in addition to sun exposure, polygenic risk scores, and demographic characteristics to identify patterns in melanoma development.

Melanoma was most often identified on the trunk (35%) and the lower limbs (34%) in participants, with upper limbs represented in 20% of cases and head and neck as the site in 11% of cases. Head and neck melanoma was associated with higher weekday sun exposure, while melanomas at other anatomical sites were not.

The presence of many nevi, compared with no nevi, was more strongly linked to melanoma on the trunk, the upper limbs, and the lower limbs than it was to head and neck melanoma. Relative to olive or brown skin, very fair skin showed a slightly weaker, but still positive, relationship with melanoma on the trunk than it did with other anatomical sites. Polygenic risk score did not show significant differences in melanoma by site.

“In conclusion, in our analysis by anatomical site we found evidence of aetiological heterogeneity for melanoma, supporting the dual pathway hypothesis,” the researchers concluded in their report. They also indicated this study’s results may be helpful in basing skin examinations on risk factors. 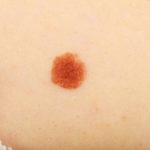