Researchers say they have discovered the optimal sequence of treatment for BRAF-mutant, advanced melanoma — first-line nivolumab plus ipilimumab followed by dabrafenib plus trametinib at disease progression.

These results, from the phase 3 DREAMseq trial (ClinicalTrials.gov Identifier: NCT02224781), were published in the Journal of Clinical Oncology.

The primary endpoint was overall survival (OS) at 2 years. Study accrual was halted early due to a clinically meaningful difference in OS between treatment arms. At that time, patients in the first-line dabrafenib-trametinib arm were given the option to receive second-line nivolumab-ipilimumab without disease progression.

The median progression-free survival (PFS) was 11.8 months with nivolumab-ipilimumab upfront and 8.5 months with dabrafenib-trametinib upfront (P =.054). The 2-year PFS rate was 41.9% and 19.2%, respectively.

The median duration of response was not reached for patients treated with nivolumab-ipilimumab upfront and was 12.7 months for those who received dabrafenib-trametinib upfront (P <.001).

“The optimal sequence of targeted molecular therapy vs checkpoint inhibitor immunotherapy as first-line treatment for patients with BRAFV600 mutant metastatic melanoma has represented a major therapeutic challenge,” the researchers noted. “This study addresses this issue and settles this question by showing that immunotherapy should precede targeted therapy as the first-line treatment for patients with BRAFV600 metastatic disease.”

Disclosures: This study was supported by the National Cancer Institute. Study drugs were provided by Bristol-Myers Squibb and Novartis. The study authors did not provide disclosures. 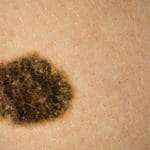