Pembrolizumab (Keytruda®, also previously known as MK-3475 and lambrolizumab; Merck & Co., Inc., Kenilworth, NJ, USA) is a highly selective monoclonal IGg4-kappa isotype antibody that selectively binds to PD-1 blocking the receptor’s negative impact on lymphocyte function. Of note, this IG4 subtype does not engage Fc receptors and, therefore, avoids the cytotoxic effects when it binds to PD-1 on the T cells.28 Pembrolizumab has been explored in a series of trials in patients with advanced melanoma (Table 1). It was first tested in a Phase I dose escalation study in patients with solid tumors, and it was deemed safe at dose levels of 1, 3, and 10 mg/kg (based on body weight) given every 2 weeks without exceeding the maximum tolerated dose. Positive clinical responses were observed at all dose levels used, particularly in those with melanoma.29 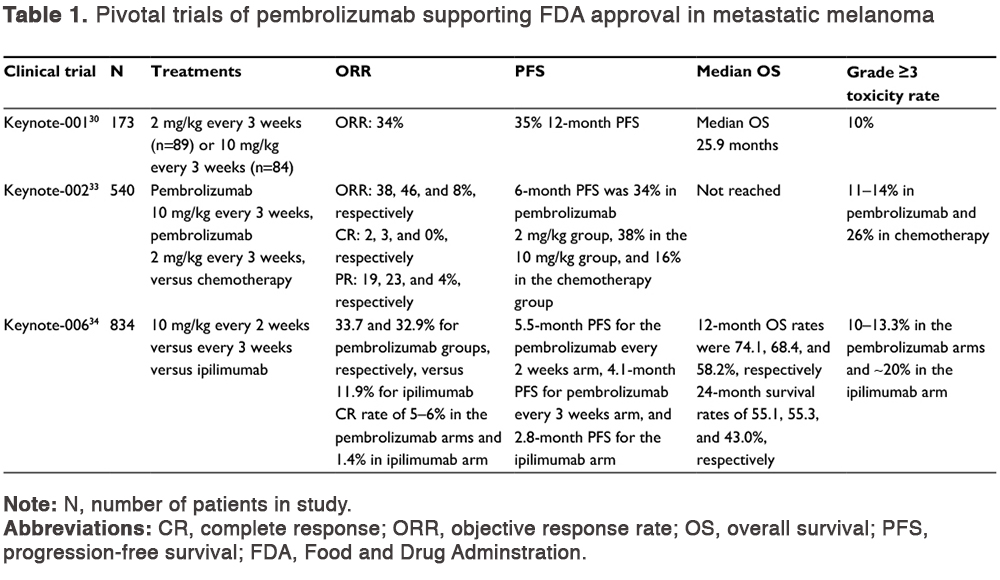 Critical to the evaluation and approval of pembrolizumab in melanoma was the Phase Ib Keynote-001 study. This trial investigated the safety and efficacy of different doses and schedules of pembrolizumab in a variety of cohorts in advanced melanoma patients.30 The cohort that was pivotal to the initial FDA approval of pembrolizumab evaluated pretreated melanoma patients who had failed ipilimumab and BRAF-targeted therapy (if BRAF mutant). These patients were randomized to receive either pembrolizumab 2 mg/kg every 3 weeks (n=89) or 10 mg/kg every 3 weeks (n=84). Patients were allowed to continue therapy until confirmed progressive disease (confirmed 4–6 weeks postinitial evidence of progression) or development of severe or intolerable toxicity. The primary efficacy outcomes for the trial were confirmed response rate and duration of response. Clinical characteristics of the patients in Keynote-001 demonstrated that most of the patients were heavily pretreated (73% with ≥2 prior therapies) and had poor prognostic features such as M1c status (82%). The confirmed overall response rate was similar between the groups at 24%. Toxicity was deemed acceptable with common side effects including fatigue, nausea, cough, rash, and diarrhea. Grade ≥3 side effects were uncommon, and <10% of patients needed to stop therapy due to side effects. Based on this information, pembrolizumab was granted accelerated approval by the FDA in 2014.

Updated results of Keynote-001 including a pooled analysis of efficacy data in advanced melanoma patients have been published, demonstrating an overall response rate of 34%, with the response being durable in 80% of these patients.31 Interestingly, the median OS for all patients treated with pembrolizumab in the trial was 23.8 months, and the 36-month OS rate was 40% highlighting the long-term benefit of pembrolizumab.32 In comparison, advanced melanoma patients treated with ipilimumab had shown an average OS of 10–11 months in earlier Phase III studies33,34 and historic median survival prior to modern melanoma therapies has been in the range of 6–9 months. The findings from Keynote-001 supported the further exploration of pembrolizumab in patients with advanced melanoma.

Evaluation of pembrolizumab in ipilimumab-naive metastatic melanoma patients was done in the Keynote-006 study.36 In this Phase III trial, patients were randomized in a 1:1:1 ratio to receive pembrolizumab at a dose of 10 mg/kg every 2 weeks or every 3 weeks or ipilimumab at a dose of 3 mg/kg every 3 weeks for four cycles. Prior therapies were allowed in the study with the exclusion of prior PD-1, PD-L1, or CTLA-4 inhibitor therapies. Patients who had mutant BRAF were allowed to enroll without prior BRAF inhibitor therapy as long as LDH was not elevated. The intent of this criterion was to exclude those patients with potentially rapidly progressing disease that could be controlled with BRAF-targeted therapy. The trial had two coprimary endpoints of PFS and OS.

The study randomized 834 metastatic melanoma patients to therapy in the trial with key characteristics including two-thirds of patients being treatment naive, a third of patients having BRAF mutant melanoma, and two-thirds of patients with M1c status. Patients were required to have an ECOG status of 0 or 1 to enter the trial, with 70% entering having a performance status of 0. PFS was found to be significantly prolonged in both of the pembrolizumab treatment arms compared to ipilimumab. The median PFS was 5.5 months for the pembrolizumab every 2 weeks arm, 4.1 months for the every 3 weeks arm, and 2.8 months for the ipilimumab arm. Additionally, landmark 6-month PFS rates were 47.3, 46.4, and 26.5%, respectively. Objective response rates were also notably improved in the pembrolizumab arms at 33.7 and 32.9% compared to 11.9% for ipilimumab, respectively. Complete responses were seen in 5-6% of patients receiving pembrolizumab compared to 1.4% of patients receiving ipilimumab. The average time to response was similar in all groups (85–87 days). At the time of initial publication, median OS was not reached in any of the treatment arms; however, landmark 12-month OS rates were 74.1, 68.4, and 58.2%, respectively. A follow-up presentation of OS data at ASCO 2016 reported 24-month survival rates of 55.1, 55.3, and 43%, respectively.37