Rituximab in the Treatment of Follicular Lymphoma: the Future of Biosimilars in the Evolving Therapeutic Landscape - Oncology Nurse Advisor

NOVEL AGENTS ON THE HORIZON: THE EVOLVING TREATMENT LANDSCAPE OF FL

Following the clinical success of rituximab in the treatment of FL, novel agents are emerging and currently under development. Ibrutinib, an oral, selective, and covalent Bruton’s tyrosine kinase inhibitor, has been approved by the US Food and Drug Administration (FDA) for the treatment of patients with mantle cell lymphoma who have received at least 1 prior therapy,21 chronic lymphocytic leukemia (CLL)/small lymphocytic lymphoma, and Waldenström’s macroglobulinemia.22 Ibrutinib has also been approved by the European Medicines Agency (EMA) for the treatment of patients with relapsed/refractory mantle cell lymphoma, in the first-line, refractory, and relapsed/refractory settings of CLL, for those with Waldenström’s macroglobulinemia who have received at least 1 prior therapy, and in the first-line setting for patients unsuitable for chemoimmunotherapy. 23 Ibrutinib has shown promising results in the treatment of FL. Ibrutinib is currently under investigation for use in combination with rituximab (ClinicalTrials.gov, NCT01980654) and as monotherapy for relapsed/refractory FL (ClinicalTrials.gov, NCT01849263).

Idelalisib, an oral phosphoinositide 3-kinase-delta inhibitor, has been approved by the FDA for the treatment of patients with relapsed/refractory CLL and relapsed/refractory FL.24 A Phase I/II study to evaluate the efficacy and safety of idelalisib in patients with previously treated low-grade FL is ongoing (ClinicalTrials.gov, NCT01306643). A Phase II study is planned to explore the efficacy and safety of idelalisib in combination with rituximab in patients with previously untreated FL and small lymphocytic lymphoma (ClinicalTrials.gov, NCT02258529).

Obinutuzumab is a humanized immunoglobulin G1 monoclonal antibody, with a novel glycoengineered Fc region. In combination with chemotherapy, obinutuzumab has been approved by the FDA for the treatment of CLL. Obinutuzumab is approved for use in combination with bendamustine followed by obinutuzumab monotherapy for the treatment of patients with FL who relapsed after, or are refractory to, a rituximab-containing regimen.25 Approval was based on an open-label, randomized, Phase III trial in patients with indolent NHL refractory to rituximab.26 In another study, obinutuzumab demonstrated clinical efficacy and an acceptable safety profile in the relapsed/refractory FL setting.27 In a Phase III study, obinutuzumab-based induction and maintenance therapy resulted in small improvements in progression-free survival in treatment-naïve patients with FL; however, a higher incidence of Grades 3–5 adverse events was observed compared with rituximab.28 A Phase I study in patients with NHL or CLL showed that induction and maintenance therapy with obinutuzumab offered clinical benefits, with a favorable safety profile.29 Similarly, obinutuzumab showed encouraging results in patients with relapsed/refractory NHL.30

Lenalidomide, an immunomodulatory agent, has been approved by the FDA for the treatment of patients with multiple myeloma, myelodysplastic syndromes, and relapsed/refractory mantle cell lymphoma.31 In a Phase II trial, lenalidomide in combination with rituximab was effective and well tolerated as initial treatment for patients with advanced indolent NHL.32 In light of these promising results, a Phase III study to evaluate the efficacy and safety of rituximab in combination with lenalidomide compared with R-CHOP, R-CVP, or BR in patients with previously untreated FL is ongoing (ClinicalTrials.gov, NCT01476787).

RITUXIMAB: CHALLENGES FOR THE FUTURE

Despite an array of novel agents emerging and in clinical development, it is likely that rituximab will remain at the forefront of FL treatment.33 However, patents for many biologics have expired or will lose exclusivity over the coming years (Figure 2). Importantly, the composition-of-matter patent covering rituximab in Europe (MabThera®) expired in 2013, and its counterpart in the US (Rituxan®) will expire in 2018. Moreover, rituximab is not widely available to physicians and patients in several countries, including the US, Mexico, Turkey, Russia, and Brazil. In a recent survey of 450 oncologists and hematologists, 31% considered rituximab an easily accessible option in Brazil. Similarly, 25% and 19% reported challenges in getting access to rituximab in Mexico and Russia, respectively. Issues related to insurance coverage, treatment guidelines, and patient comorbidities were the most common barriers to access or use of rituximab. Indeed, these barriers have the potential to compromise clinical outcomes and patient care across the spectrum of FL treatment, potentially resulting in a change or delay in treatment with rituximab, largely the result of payment issues or patient response. However, Baer et al found physicians who participated in the survey would increase use of rituximab if a more affordable version were available, without compromising efficacy, safety, or patient care.34 Another concern in the biologics arena is that these agents are likely to be susceptible to drug shortages as a consequence of sparse active ingredients, coupled with obstacles in manufacture and supply. In addition, suboptimal compliance with current good manufacturing practice, changes in clinical standards, a greater demand for rituximab, and manufacturing delays are the most common factors that contribute to drug shortages.35 The supply of chemotherapeutics, such as 5-fluorouracil, liposomal doxorubicin, and fludarabine, as well as rituximab, may be adversely affected by looming drug shortages, with potentially pernicious outcomes for patients.36 Drug shortages can lead to delays in treatment, use of alternative, potentially less effective treatment, increased case management for health care professionals, and poor availability of more effective, well-tolerated combination therapies.35

The loss of exclusivity and limited access to rituximab has led to the development of well-characterized, safe, and effective biosimilars to rituximab. Biosimilars are defined as biologic products that are highly similar to the reference biologic product, notwithstanding minor differences in clinically inactive components.37 The availability of biosimilars may mitigate the impact of the limited access to rituximab. Biosimilars provide a greater spectrum of treatment choices and may offer efficiencies to the health care system. In addition, biosimilars increase access to biologics and foster greater use of biologic therapies, which may facilitate improved overall health outcomes at a time when a shortage of biologics may become a barrier to the treatment of patients with FL. Biosimilars have the potential to increase access to therapies by offering more affordable treatment options. Savings with biosimilars could facilitate the reallocation of expenditure to optimize treatment of patients with FL, resulting in patients receiving treatment earlier in therapy, with more patients able to access medicines such as rituximab.37

UNDERSTANDING BIOSIMILARS: AN OVERVIEW OF DEVELOPMENT AND PATHWAYS TO APPROVAL

Biosimilars are large, structurally complex molecules developed to be similar to and treat the same condition(s), using the same treatment regimens as an existing licensed or approved (originator or reference) biologic. Development of biosimilars involves a stepwise approach of physicochemical and biological evaluation, along with a series of comparative nonclinical and clinical studies. Several factors influence the extent of clinical data required for the approval of biosimilars, including the similarity to the originator biologic and strength of preclinical data as well as the molecular complexity. The ultimate aim of biosimilar development is to demonstrate that there are no clinically meaningful differences based on the “totality of evidence” encompassing all available analytical, nonclinical, and clinical data. The totality of evidence approach is specifically tailored for biosimilars and applies a different paradigm than the regulation of originator biologics, for which the aim is to establish de novo efficacy and safety. Furthermore, the biosimilar developer is not required to demonstrate efficacy to the reference biologic in each indication, as the extrapolation of clinical data across indications is permitted, and any differences may be considered in the totality of evidence, given appropriate scientific justification.38

The approval of biosimilars is a highly regulated and comprehensive process (Table 2). The EMA and the US FDA have published extensive guidance documents with their respective definitions of biosimilars, and the requirement of a series of detailed analytical and similarity assessments, nonclinical in vivo evaluation, and safety and efficacy studies, all in comparison with the reference biologic.38,39 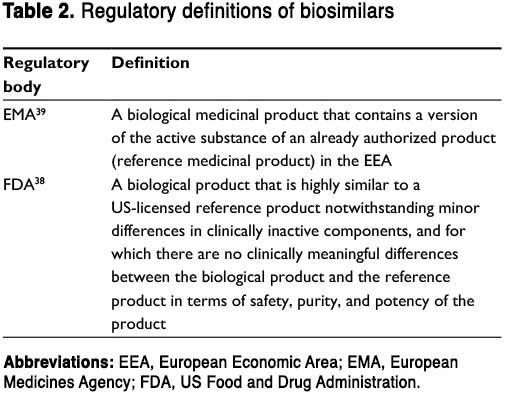 The biosimilars approval pathway was established in the European Union (EU), with 8 biosimilars (under 20 different trade names) authorized by the EMA over the past decade.40 The first biosimilar in the US (filgrastim-sndz [Zarxio®]), a biosimilar version of Neupogen®, was granted approval in 2015 under the US Biologics Price Competition and Innovation Act of 2009.41,42 Although complex, the regulatory approval process for biosimilars in Europe,39 the US,38 and elsewhere43 has been tailored and is often shorter than that required for originator biologics.