The study, presented at the 57th American Society of Hematology (ASH) Annual Meeting, sought to determine whether PET, performed after 2 cycles of upfront BEACOPPesc, might identify a population suitable for receiving subsequent doxorubicin, bleomycin, vinblastine, dacarbazine (ABVD) chemotherapy; that is, those “able to benefit from a strategy of dose intensity de-escalation” without impairing disease control, said Olivier Casasnovas, MD, of Hopital Le Bocage, CHU Dijon.

To date, studies have shown that escalated BEACOPP—bleomycin, etoposide, doxorubicin, cyclophosphamide, vincristine, procarbazine, and prednisone—demonstrates better disease control than ABVD, but does not improve overall survival. In this study, after 2 BEACOPPesc cycles and PET, patients were randomly assigned to receive 4 cycles of ABVD if PET-negative and 4 cycles of BEACOPPesc if PET-positive. In the control arm, patients received a standard treatment not monitored by PET, 6 cycles of BEACOPPesc.

However, PET positivity was related to a significantly lower 2-year progression-free survival compared to PET-negative patients, 72.9% vs 92.8%; P < .0001. When examined by PET-driven strategy, 2-year progression-free survival was 95% in patients who were PET-negative after 2 cycles, 78% among those who were PET-positive, and 42% in the standard arm.

“PET positivity after 2 cycles of BEACOPPesc is related to a higher risk of disease progression,” Dr Casanovas said, adding the “PET performed after 4 cycles of chemotherapy identifies a subset of paitents with a particularly poor outcome.”

These results should encourage development of new treatment options in patients with PET-positive advanced stage Hodgkin lymphoma, he concluded. 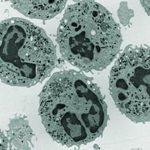 TARC Confirmed as Biomarker of Response to PET, Brentuximab Vedotin in Hodgkin Lymphoma