Establishing the diagnosis of gray zone lymphoma (GZL) is often complex because of the presentation of mixed features of both classical Hodgkin lymphoma and diffuse large B-cell lymphoma (DLBCL). Recent evidence has demonstrated that misclassification can have significant therapeutic implications, particularly in the frontline setting. As a result, improving differential diagnosis and disease classification is essential to ensure patients are provided optimal treatment.1

In a review article published in Surgical Pathology, Kyle Parker, MD, and Girish Venkataraman, MD, of the department of pathology at the University of Chicago in Illinois, summarized current literature surrounding the diagnosis of GZLs. In the review, they addressed discrepancies in the immunohistochemical profile and morphologic appearance of these lymphomas.

Overview and Classification of GZLs

In accordance with the 2008 and 2016 World Health Organization classification criteria, B-cell lymphoma, unclassifiable, with features intermediate between classic Hodgkin lymphoma and DLBCL, is considered a distinct B-cell lymphoma.2,3 Another term, mediastinal GZL, is also used to describe the malignancy because of its primary mediastinal occurrence. When the primary site of disease is the peripheral lymph nodes, it is termed nonmediastinal GZL.

A recent retrospective study conducted in multiple centers throughout North America examined clinical characteristics, prognosis, and outcomes of patients with GZL.4 The researchers found that survival outcomes were similar for patients with mediastinal and nonmediastinal GZLs. In addition, they reported that disease stage and performance status were important prognostic factors for the malignancy.

With respect to treatment, recent studies have shown that disease misclassification can significantly affect survival, especially in the first-line treatment setting. As a result, misclassification of GZL as DLBCL or classic Hodgkin lymphoma has the potential to influence the optimal selection of frontline chemotherapy. Expert review by a subspecialized pathologist remains one of the best strategies for establishing a diagnosis of GZL.

The clinical presentation of GZL is often variable, but can be associated with physical manifestations, commonly a large anterior mediastinal lesion, plus or minus extramediastinal involvement. In patients with anterior mediastinal disease, other symptoms may also be present, including superior vena cava syndrome or dyspnea. Common metastatic sites include the liver, lungs, spleen, and less commonly, the bone marrow.

With respect to age, the malignancy is most frequently seen in young males, but patients can also be older at diagnosis; older age is more common in those presenting without signs of mediastinal disease. 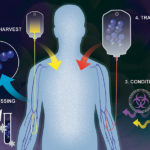