Abstract: Malignant pleural mesothelioma is an uncommon and aggressive thoracic malignancy that is rarely curable, even when multimodality therapy is used. Systemic chemotherapy is the primary treatment for the majority of patients with this disease; however, surgical resection may benefit a subset of patients with early-stage disease. The surgical approach that offers the best outcomes remains an area of controversy, with data from retrospective comparisons being the only guide. Historically, extrapleural pneumonectomy (EPP) has been the standard procedure, carrying with it a cost of significant morbidity and impact on quality of life that has raised questions regarding its routine application. Over the past two decades as surgical techniques have been refined and survival data with EPP in large case series have been reported, the paradigm has evolved toward the use of lung-sparing pleural resections such as pleurectomy/decortication (P/D) and extended P/D. The identification of patients who may benefit from EPP over pleurectomy has proven problematic, and the larger question regarding the impact of any type of surgical intervention on outcomes for pleural mesothelioma patients is still an area of investigation. Uniform treatment approaches have been difficult to develop due to the relatively small numbers of patients with this disease, the use of a staging system that does not readily identify those who may benefit from more aggressive therapy, and the institutional biases that have resulted from the growth of multimodality centers of excellence.

Malignant pleural mesothelioma (MPM) is a pleural mesothelial cancer that is aggressive in nature with a median survival of <12 months, a number that has shown little change in the past four decades, according to the results of a recent analysis of the Surveillance, Epidemiology, and End-Results (SEER) database.1 Asbestos exposure, typically in the workplace, has been well established as the major risk factor in the development of this malignancy, and the risk for the development of MPM among asbestos workers was at one time thought to be as high as 17% in those exposed at younger ages.2 The latency period between initial asbestos exposure and diagnosis is typically >30 years, which renders any effective screening effort nearly impossible.3 According to the World Health Organization (WHO) database, between the years 1994 and 2008, 92,253 deaths from MPM were reported in 83 countries with a mean age of 70 years and a 3.6:1 male to female ratio; 54% of reported deaths were in Europe and not surprisingly during the time frame studied, the reported cases were noted to shift to countries where workplace asbestos exposures have continued.4–6 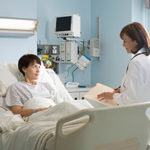