Longer survival was achieved with stereotactic radiosurgery (SRS) alone than with whole-brain radiation therapy (WBRT) in patients with fewer than 4 brain metastases from non-small cell lung cancer (NSCLC) or breast cancer, a study in the journal Cancer has shown.1

Although use of SRS to treat brain metastases in place of WBRT is increasing, the optimal treatment for these patients remains controversial. In this study, researchers examined the differences in patterns of care at 5 centers before 2010 and overall survival in patients treated with SRS compared with those treated with WBRT. 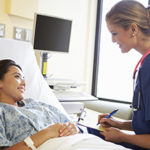