Mutational frequencies were not significantly different between white and black patients with lung adenocarcinoma and lung squamous cell carcinoma, suggesting that differences in mutational profiles do not likely impact the incidence and mortality of lung cancer in black patients, according to a study published in JAMA Oncology.1

Although lung cancer is the leading cause of cancer death in the United States in all ethnic and racial groups, the overall death rate from lung cancer is higher in black patients than in white patients.

Because differences in mutational frequencies could explain differences in prognosis and lead to a reduction in outcome disparities, researchers sought to determine whether mutational profiles of lung cancers differ between black and white patients.

Using 313 adenocarcinomas and 138 squamous cell carcinomas with genetically supported ancestry, researchers found no significant difference in the overall mutational frequencies or copy number changes between black and white patients in either tumor subtype.

In lung adenocarcinoma samples, results further revealed no significant difference in specific activating alterations in members of the receptor tyrosine kinase/Ras/Raf pathway, including EGFR and KRAS, between white and black patients.

The findings ultimately suggest that both black and white populations could derive significant benefit from participating in clinical trials evaluating targeted therapies. 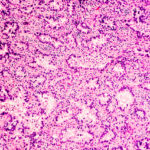 Considerable Shifts in NSCLC Treatment With Modest Gains in Survival