The approval was based on data from several clinical trials, including the phase 3 PACIFIC trial and the phase 3 CASPIAN trial. Among patients administered 1500mg every 4 weeks, the steady state AUC, Ctrough, and Cmax was observed to be 6% higher, 19% lower, and 55% higher than in those administered 10mg/kg every 2 weeks, respectively. Based on pharmacokinetic data, no clinically meaningful differences in efficacy or safety between the 2 dosing regimens in patients weighing greater than 30kg are expected.

“This new 4-week dosing option gives doctors the choice to cut the number of visits for critical cancer treatment in half and offers a regimen that is more convenient for patients,” said Victoria M. Villaflor, MD, Clinical Professor in the Department of Medical Oncology and Therapeutics Research at City of Hope Cancer Center, Los Angeles, California.

The new regimen is also consistent with the approved dosing of Imfinzi for the first-line treatment of adult patients with extensive-stage small cell lung cancer, in combination with etoposide and either carboplatin or cisplatin.

Imfinzi approved in the US for less-frequent, fixed-dose use. [press release]. Wilmington, DE: AstraZeneca; November 20, 2020. 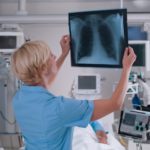