Patients with limited-stage small cell lung cancer (LS-SCLC) seemed to derive little benefit from prophylactic cranial irradiation (PCI), according to a new study. In a comparison of patients who did and did not undergo PCI, there was no significant difference in development of new brain metastases or overall survival for those who received PCI.

“Currently, PCI is a category 1 recommendation after at least a partial response to thoracic radiation, according to the National Comprehensive Cancer Network and the American Society for Radiation Oncology guidelines,” the researchers wrote. “These recommendations are based primarily on a large meta-analysis of LS-SCLC trials showing a 5.4% overall survival benefit associated with PCI. However, most of the data on this topic, including that meta-analysis, were published before the routine use of MRI for staging, which has superior sensitivity in detecting brain metastasis compared with computed tomography.”

To evaluate the use of PCI further, this study included 297 patients with LS-SCLC treated at The University of Texas MD Anderson Cancer Center in Houston. All patients underwent thoracic radiation; 205 also underwent PCI.

The 3-year cumulative incidence rate of brain metastases was higher in the no-PCI group compared with the PCI group when counting death as a competing risk. Although the risk was nearly double for no PCI, the difference between the 2 groups was not statistically different (20.40% for no PCI vs 11.20% for PCI; P =.10). Use of PCI was not associated with a decreased risk for development of new brain metastases (hazard ratio, 0.513; 95% CI, 0.239-1.098; P =.09).

“The use of PCI for patients with LS-SCLC is complex and is a personalized decision that should include discussion regarding the context of the survival benefit seen in the historical data, the consequence of the potential intracranial control benefit, patient understanding, the availability of various radiation salvage options, and the associated neurotoxic effects of whole-brain radiation therapy,” the researchers concluded. 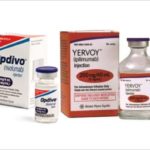 Nivolumab Plus Ipilimumab Under Review for First-Line Treatment of NSCLC