A study of patients who were smokers at the time of early-stage non-small cell lung cancer (NSCLC) diagnosis revealed possible links to improved survival outcomes with smoking cessation in this population. The study results were reported in the journal Annals of Internal Medicine.

This prospective, observational study was conducted at the N.N. Blokhin National Medical Research Center of Oncology and City Clinical Oncological Hospital No. 1 of Moscow, Russia. It included patients with early-stage NSCLC (stages I, II, or IIIA). The researchers assessed overall survival (OS), progression-free survival (PFS), and all-cause and lung cancer-specific mortality patterns in patients who quit smoking after the NSCLC diagnosis. Smoking status was based on patient self-reporting.

At follow-up, 63.2% of patients had died, and 52.8% of patients had experienced cancer-specific deaths. Approximately one-third (33.7%) of patients had tumor progression. The adjusted median OS duration was higher by 21.6 months for patients who had quit smoking, compared with those who had continued smoking; the median OS times were 6.6 years and 4.8 years, respectively (P =.001).

“In summary, our prospective study provides extensive evidence that quitting smoking after a diagnosis of early-stage NSCLC can have an important effect on subsequent mortality and progression-free survival,” the researchers concluded. 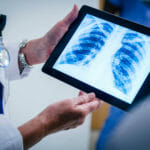