Radiation therapy is associated with an increased risk of MACE among patients with locally advanced NSCLC. Most studies have evaluated MHD to evaluate cardiac toxicity, but MHD is not a sufficient surrogate for coronary artery dose. The aim of this study was to evaluate the role of MHD and left anterior descending (LAD) dose in predicting the risk of MACE in this population.

The investigators conducted a retrospective study by analyzing data from 701 consecutive patients with stage II to III NSCLC who received thoracic radiotherapy at a single center between 2003 and 2014. Radiation therapy was delivered as definitive treatment concurrent with chemotherapy or as neoadjuvant or adjuvant therapy with or without chemotherapy.  MACE included cardiac death, unstable angina, myocardial infarction, heart failure hospitalization or urgent visit, or coronary revascularization.

The authors concluded that “MHD is not sufficient to predict LAD V15Gy with confidence and that isolated low LAD V15Gy significantly reduces the risk of MACE.” They added that “These findings further question the validity of continued utilization of whole heart metrics to predict cardiac toxicity and similarly question reliance on MHD constraints in guidelines and clinical trials.” 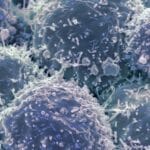