In recent years, immune checkpoint inhibitors (ICIs), such as anti-cytotoxic T-lymphocyte antigen-4 (CTLA-4) and antiprogrammed death-1 (PD-1) therapies have been found to improve survival rates among patients with advanced non-small cell lung cancer (NSCLC) compared with the combination chemotherapy regimens previously used in many of these cases.1 However, ICIs have also been linked to immune-related adverse events (irAEs), affecting various organs, including the lungs.

ICIs “harness the intrinsic immune response against tumor antigens by removing the brake on T-cell activation by antigen-presenting cells,” according to a recent paper by Karthik S. Suresh, MD, assistant professor of medicine at Johns Hopkins University School of Medicine in Baltimore, Maryland, and colleagues.1 “However, by the same process, these agents may also promote T-cell attack on self-antigens, which clinically manifests as irAEs.”

Findings suggest that an estimated 3% to5% of patients receiving ICIs develop checkpoint inhibitor pneumonitis (CIP), although the condition may be underreported and thus likely more prevalent.1 Although most irAEs have been more closely associated with anti-CTLA-4 treatment vs anti-PD-1 treatment, studies indicate that pneumonitis is more common with anti-PD-1 therapies.2 Whereas monotherapy with these agents has been linked with relatively low incidence of irAEs (<5%) in clinical trials, the incidence may be higher with combination ICIs in patients with certain tumor types and in nontrial settings.1

A study published in 2017 reported that the median time to onset of symptoms after initiation of ICI treatment was 2.8 months, although substantial variability in this timeframe has been reported.3 The presentation of CIP is “nonspecific and characterized by dyspnea, cough, fever, chest pain, and progressive decrease in exercise tolerance,” wrote Dr Suresh and colleagues.1

As such, close “attention to respiratory symptoms is required for early detection of CIP,” for which the diagnosis is ultimately one of exclusion. For example, other possible diagnoses include pneumocystis pneumonia in patients taking high doses of steroids for comorbid conditions and radiation pneumonitis in patients receiving chest radiation.

Chest computed tomography is recommended for all patients presenting with new respiratory symptoms during ICI treatment. Highly variable radiographic findings have been observed in ICI-related pneumonitis.

“The most frequently reported findings are that of cryptogenic organizing pneumonia (COP), with ground-glass or consolidative opacities in peripheral or peribronchial distribution, followed by nonspecific interstitial pneumonia (NSIP), with ground-glass opacities and reticular opacities primarily in the peripheral and lower lungs,” wrote the authors of a 2017 paper published in Cancer Management and Research.2

Acute interstitial pneumonia, acute respiratory distress syndrome, and hypersensitivity pneumonitis have also been noted in these patients, as have sarcoid-like pulmonary changes, such as subpleural micronodular opacities.

Corticosteroids represent the mainstay of treatment for CIP, with a dose of 1 to4 mg/kg, depending on the grade of the condition.1 Approximately 70% to 80% of patients respond to this regimen. Patients who do not demonstrate clinical improvement within 48 to72 hours after initiation of corticosteroids are considered treatment-refractory and may benefit from a second-line immunosuppressant, such as infliximab, intravenous immunoglobulin, or tocilizumab; these therapies have been used with varying results.1 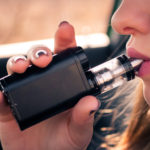