TUMOR MUTATIONAL BURDEN AND OTHER BIOMARKERS

Cancer is a genetic disease as a consequence of the accumulation of somatic mutations into the DNA of the affected cells. These mutations may generate neoantigens (tumor-specific, mutated peptides presented in the surface of cancer cells) that should be adequately processed and presented by the major histocompatibility complex (MHC), and afterward these neoantigens should be recognized by T-cells as non-self to achieve adequate antitumor T-cell response,16 stimulating the patient’s immune system to reject the tumor. However, not all mutations will generate neoantigens. In fact, only a minority of mutations generate peptides that are properly processed and loaded on to MHC complexes, and even fewer are able to be recognized by T cells.17 The amount of neoantigens correlates with the probability to enhance the T-cell response. Although only a minority of these mutations will generate neoantigens,18 the hypothesis is that the chances of a neoantigen existing will be increased if more non-synonymous mutations are present in the tumor. Therefore, tumor mutational burden (TMB), defined as the number of non-synonymous alterations (somatic, coding, base substitutions, and short indels) per megabase (mut/MB) of genome examined, can represent a useful estimation of tumor neoantigen load.17

TMB can be determined through whole exome sequencing (WES) or targeted next-generation sequencing (NGS) and it is defined as either the total number of somatic mutations (Mut) in the tumor exome (WES) or the total number of synonymous and non-synonymous mutations per megabase (Mb) present at ≥5% allele frequency in the sequenced tumor genome by NGS (FoundationOne CDx assay). Results are expressed as Mut/Mb. Major limitations for using WES in daily clinical practice include its cost, and the facts that this technique is time consuming, labor intensive, and needs large sequencing capacity; for these reasons, NGS is the most commonly used technique for extrapolating the TMB in daily clinical practice, usually with a limited number of genes.16Although TMB quantified by targeted NGS correlates with that of WES,19,20 caution may be needed when using smaller panels. TMB is a continuous variable, so different assays and different definitions of high TMB will alter the population size and then the extent of treatment benefit in the identified biomarker-positive group.21 Therefore, the standardization of TMB calculation and reporting, as well as a universal threshold for defining high TMB, are current challenges.16 Of note, not all neoantigens may cause an immune response. Neoantigens may be a result of previous cytotoxic therapy, which can increase the abundance of branch mutations and consequently TMB but cannot trigger an immune response.22

TMB has been associated with improved survival in patients receiving ICI across a wide variety of cancer types.23 The variance of TMB number is high between different tumor types, and NSCLC is usually associated with high TMB.24,25 TMB is particularly increased in smokers and is noteworthy in metastases as compared to its primary counterparts.26,27 Importantly, TMB and PD-L1 expression appear to be independent predictors of response to ICIs.19,26 However, it has been reported that the use of combined biomarkers, PD-L1 and TMB, may result in predictive synergism.13 Different clinical trials have assessed the predictive value of TMB in different nivolumab plus ipilimumab combination trials, which will be detailed in the next section of this manuscript.

As an alternative to tissue, TMB has been also assessed in circulating tumoral DNA (ctDNA) from blood/plasma (bTMB). In one retrospective study in NSCLC, bTMB was determined using a 394-gene panel and was compared to tissue TMB (FoundationOne CDx assay) and to the FoundationACT (FACT) dedicated to ctDNA assay (including only 62 genes). Out of 259 patients were evaluable for both bTMB and tissue TMB. Overall agreement and positive percent agreement (PPA) were 81.5% and 63.6%, respectively, when using the 394-gene panel for bTMB. However, when the FACT assay was compared to tissue TMB, PPA dropped to 17%, suggesting a sufficiently sized panel is required to sensitively identify patients with high TMB. However, the performance on variant detection was similar when overlapping allele regions were compared: 93% of variants were detected in both assays.28 The predictive value of bTMB in NSCLC patients for the efficacy of ICI as monotherapy has been retrospectively assessed in second-line29 and prospectively in the first-line setting.30 Similarly, the predictive value of bTMB in trials assessing the combination of ICI, including nivolumab and ipilimumab, is discussed in the next section of this manuscript. It is noteworthy that improved understanding of pharmacodynamic effects of these agents in patients will support rational development of immune-based combinations against cancer31 and understand the multiple cellular mechanisms underlying the synergistic benefit of this combination may help to enhance the efficacy of this strategy.32

Beyond PD-L1 and TMB, there may be other important potential predictive biomarkers. MSI, a pattern of hyper-mutation that occurs due to defects in the mismatch repair system, has also been identified as an independent predictor of response to immunotherapy regardless of the cancer’s tissue of origin.33 However, its rarity (only a small fraction of 3.8% of cancers and 1% of NSCLC),34 impairs its use, at least in the NSCLC population, as a unique clinical ICI biomarker. The presence of mutations in genes such as JAK1, JAK 2, β2M, STK11, SERPINB3 and SERPINB4, as well as some immune evasion mechanisms like transforming growth factor beta signaling or indoleamine 2,3-dioxygenase (IDO) activity, may influence response to ICIs.35–38 The role of all these potential biomarkers must be validated in prospective trials. The T-cell-inflamed gene expression profile,39 immune gene expression signatures,40,41 as well as a description of the microbiome42–44 also represent emerging predictive biomarkers that have to be validated prospectively. In this setting, the CheckMate 592 (NCT03001882) is a two-part, exploratory, open-label phase II study exploring potential biomarkers, including PD-L1 and TMB, and their association with clinical benefit with first-line nivolumab and ipilimumab for stage IV or recurrent NSCLC. In part 1, approximately 100 patients will be analyzed at baseline according to PD-L1 status (≥1% vs <1%). In part 2, approximately 150 patients will be treated regardless of PD-L1 status. The primary endpoint in part 1 is the association of response rate (RR) with baseline TMB, along with candidate peripheral blood and tumor biomarkers at baseline and on treatment; as well as outcome according to progression-free survival (PFS) and overall survival (OS). Primary endpoints in part 2 are the association of RR with baseline tissue and blood TMB, and secondary endpoints are RR, PFS, OS, safety, and the association of enteric biomarkers with efficacy.45 This trial will help to elucidate other potential predictive biomarkers with clinical utility in daily clinical practice for patient selection.

CLINICAL TRIALS WITH NIVOLUMAB AND IPILIMUMAB

CheckMate 012 (NCT01454102) is a multicohort phase I study that was designed to evaluate nivolumab as monotherapy or in combination with other agents, including ipilimumab, as first-line treatment for advanced NSCLC patients.46–49 In the cohort assessing the safety and efficacy of the combination of nivolumab and ipilimumab, different schedules were evaluated in different amendments of the protocol. Finally, according to tolerability and safety concerns, patients were randomly assigned (1:1:1) to receive nivolumab 1 mg/kg every 2 weeks plus ipilimumab 1 mg/kg every 6 weeks, or nivolumab 3 mg/kg every 2 weeks plus ipilimumab 1 mg/kg either every 12 weeks or every 6 weeks until disease progression, unacceptable toxicities, or withdrawal of consent. Data from the two nivolumab at 3 mg/kg every 2 weeks cohorts were considered potentially suitable for further clinical development, and we will focus on published results on efficacy and safety for this combination.46

A total of 78 patients were randomized to receive nivolumab plus ipilimumab every 12 weeks (Q12W, N=38) or every 6 weeks (Q6W, N=39). Patients with adequately treated and asymptomatic brain metastases (BM) were eligible as well as patients harboring EGFR mutations (10% of enrolled patients). Patients were not selected according to PD-L1 expression or other biomarkers. However, PD-L1 expression (by clone 28–8 IHC) was assessed retrospectively in fresh or archival pretreatment tumor samples.46 Baseline PD-L1 expression was quantifiable in 90% of patients (N=66) in Q12W/Q6W cohorts; of these, 47 (68%) and 13 (19%) patients had ≥1% and ≥50% PD-L1 expression, respectively.50 Similar proportions of grade 3–4 treatment-related adverse events (AEs) were reported in both cohorts (37% in the Q12W vs 33% in Q6W); with the most commonly reported grade ≥3 AEs increasing lipase, pneumonitis, adrenal insufficiency and colitis. Treatment-related serious AEs were reported in 32% and 28% of Q12W and Q6W arms, respectively, with a similar proportion of patients in both arms who discontinued treatment as a consequence of treatment-related AEs (11% and 13%, respectively). No treatment-related deaths occurred.46 Efficacy was similar in both schedule arms with a confirmed response rate (RR) of 47% in the Q12W arm and 38% in the Q6W arm. It is noteworthy that progressive disease was reported in 13% and 28% of patients of both arms, respectively. However, disease progression in Q6W arm occurred earlier, with 44% of patients experiencing progression or dying before the first imaging assessment, compared with 18% in Q12W arm. Globally, these results suggest a real risk of hyper-progressive disease on treatment with the combination rather than suggesting intrinsic differences in clinical activity between ipilimumab given Q6W or Q12W. The median duration of response was not reached in either cohort. Median PFS was longer in the Q12W arm compared with Q6W arm (8.1 months vs 3.9 months).46 The magnitude of clinical benefit achieved with the combination treatment was enhanced with higher PD-L1 expression. Pooling the two cohorts and after 2 years of follow-up, the RR was 43%, reaching 57% and 92% in patients with ≥1% (N=47) and ≥50% PD-L1 expression (N=13), respectively. Similarly, the PFS was longer among tumors with PD-L1 expression, with a 2-year PFS of 29% in the whole population, reaching 38% and 54% in tumors with PD-L1 expression ≥1% and ≥50%, respectively. Finally, the 2-year OS was also enhanced in PD-L1 positive tumors, being of 49% in the whole population, and increasing to 58% and 62% for PD-L1≥1% and PD-L1≥50% patients.50 The study was not powered to directly compare safety and efficacy between both treatment schedules due to a limited number of patients and imbalances in baseline relevant clinical characteristics because of the lack of stratification.50 In the pooled cohort, 44% of patients achieved 2-year survival or longer. These patients compared with the whole population trend toward being more current/former smokers and PD-L1 positive.50 TMB by WES was assessed in 75 patients enrolled in the CheckMate 012 trial, demonstrating the association between TMB high (> median, 158 mutations) vs low (< median) and the efficacy of nivolumab an ipilimumab in terms of RR (51% vs 31%, p=0.0005) and PFS (HR 0.41, 95%ci: 0.23–0.73, p=0.0024)51 (Table 1). Globally, these results suggested a better outcome was attained with the combination of nivolumab and ipilimumab in tumors with PD-L1 expression and high TMB.50,51 The CheckMate 012 trial endorsed a potential clinical activity synergism and tolerable safety profile with the combination, supporting further assessment of this combination in a phase III study. After integrating observations from other tumor types in which greater ipilimumab exposure was associated with improved activity, the nivolumab 3 mg/kg Q2W plus ipilimumab 1 mg/kg Q6W regimen was chosen for further development in NSCLC.46 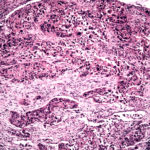