Elderly patients with non-small cell lung cancer (NSCLC), the most common form of lung cancer, undergoing radiotherapy have a lower occurrence of esophagitis than younger patients and can tolerate aggressive standard treatment.1

A large number of lung cancer patients are older than 65 years, yet they are poorly represented in clinical trials, undertreated, and do not receive aggressive standard treatments due to concerns that they may be intolerant to the procedure.

A recent study published in the Journal of Thoracic Oncology, assessed the ability of elderly patients to tolerate definitive lung radiation in comparison to younger patients. Tolerance was defined by the severity of esophagitis and radiation pneumonitis, which may result from thoracic radiotherapy treatments.

In an initial study of 125 patients, where the median age was 66 years, the authors found a significant decrease in the occurrence of radiation esophagitis in elderly patients, even after correcting for esophageal dose, concurrent chemotherapy, history of smoking, and performance status. The results were replicated in a larger study of 691 patients. Furthermore, the researchers found that the probability of developing esophagitis for a 70-year-old patient without a history of smoking, who received high doses of radiation to the esophagus with concurrent chemotherapy, was one third that of an identical 50-year-old patient. 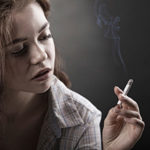