Many patients with lung cancer experience dyspnea, or shortness of breath, and a commonly used nonpharmacologic strategy for managing this effect is applying a stream of air toward the face with a handheld fan.  Although research has shown short-term benefits of this strategy, research on longer-term effects was lacking.

Therefore a group of researchers at a hospital in Turkey set out to assess a variety of effects that a handheld fan can have on dyspnea, including on pulmonary function test (PFT) values and arterial blood gas (ABG) levels. They also were interested in learning more about the potential effects on quality of life for patients with lung cancer. Their findings were published in the Clinical Journal of Oncology Nursing.

Of 142 hospitalized patients with lung cancer in the palliative care unit, 96 patients met the inclusion criteria. Participants were randomly assigned to a control group (49 patients) that received standard care, such as oxygen therapy, bronchodilator drugs, and semi-Fowler positioning; and an experimental group (47 patients) that received standard care plus were taught to use a battery-operated handheld fan held 15 cm away from their face 3 times a day for 5 minutes.

Data was collected from both groups over the course of 14 days. The long-term effects of using the handheld fan was assessed by comparing the following scores on the first and fourteenth days: vital signs, modified Borg scale (MBS) scores, the Functional Assessment of Chronic Illness Therapy-Palliative Care (FACIT-Pal) scores, PFT values, and ABG levels.

“In this study, the MBS scores of the participants in the experimental group were lower on the fourteenth day as compared to the other days, indicating that the long-term use of the handheld fan was effective in reducing participants’ dyspnea,” the researchers reported.

The experimental group also experienced better quality of life. “Therefore, the use of a handheld fan is a practical, inexpensive and home-friendly approach to manage dyspnea in this patient population,” they concluded. This evidence provides guidance for palliative care nurses, who could either try using fans with their patients or teaching them how to use handheld fans themselves when experiencing dyspnea.

These findings were limited by the study’s relatively small number of participants and that it was conducted at a single center. The researchers also noted that high mortality rates among patients with lung cancer made follow-up with participants difficult. 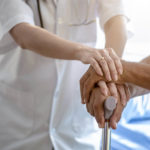