A small pilot study identified a potential biomarker for locally advanced small cell lung cancer recurrence with the hope of guiding early therapies. Chimbu Chinniah, a research fellow in radiation oncology in the Perelman School of Medicine at the University of Pennsylvania, presented the results at the 2017 Multidisciplinary Thoracic Cancers Symposium.1

“The additional lead time afforded by an earlier diagnosis may enable doctors to better tailor alternative and salvage treatments to improve their patients’ outcomes and quality of life. Earlier detection of recurrence may even translate into an increased likelihood of curing these patients when their tumor burden is lowest and thus more likely to respond to therapy,” Mr Chinniah said in a press release.2

There is limited data on the use of circulating tumor cells (CTCs) as a biomarker for monitoring treatment and recurrence in nonmetastatic lung cancer. Mr Chinniah and colleagues sought to assess the use of CTCs as a biomarker in locally advanced non-small cell lung carcinoma (LA-NSCLC).

Participants with stage II or III LA-NSCLC treated with chemoradiation had serial samples obtained prior to, during, and after chemoradiation. The test detected CTCs with an adenovirus probe capable of detecting higher telomerase activity characteristic of lung cancer.1

This prospective pilot study included 48 participants with a median age of 66 years. Participants had diagnoses of adenocarcinoma (46%) or squamous cell carcinoma (48%) and were mostly Caucasian (69%), males (54%), and former smokers (77%).

Interestingly, 10 participants were found to have negative CTC counts on the first post-RT sample with subsequent elevations prior to radiographic evidence of recurrence by a mean of 4.7 months.

Although confirmatory trials are needed, the authors write that these results suggest that “longitudinal CTC monitoring in patients with LA-NSCLC treated with chemoradiation is feasible, and that CTC elevations in many patients meaningfully precede radiologic evidence of disease recurrence.”1

Principal investigator Charles B. Simone II, MD, said in the press release, “The future use of circulating tumor cells as a diagnostic and prognostic tool for localized NSCLC looks promising. Although imaging remains the cornerstone of posttreatment surveillance for patients, blood tests could, and perhaps should, be used in conjunction with imaging scans to better monitor patients during their follow-up period after treatment.”2 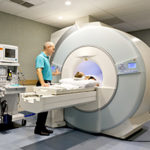