There were considerable shifts in the treatment of advanced-stage non-small cell lung cancer (NSCLC) from 2000 to 2011 accompanied with modest gains in survival and total Medicare spending, according to a study published in the Journal of Clinical Oncology.1

Various agents, including biologic targeted agents, have been approved for advanced NSCLC over the last decade, but there have been limited data on their use and associated survival and spending. Therefore, researchers sought to use linked Surveillance, Epidemiology, and End Results (SEER)-Medicare data to assess infusion and oral antineoplastic agents prescribed for newly diagnosed advanced-stage NSCLC over a 12-year period.

For the study, researchers analyzed data from 22,163 older patients with newly diagnosed advanced-staged NSCLC who were treated with antineoplastic agents between 2000 and 2011. Investigators estimated the adjusted percentage of patients who received each agent, days while on treatment, survival, and spending in the 12 months after diagnosis.

Importantly, approximately 44% of patients received antineoplastic agents in the last 30 days of life throughout the study period, regardless of year of diagnosis. Current guidelines recommend treating patients until evidence of disease progression, after which time patients may live only a few weeks. 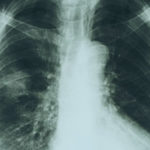 Delayed Adjuvant Chemotherapy Not Associated With Survival in NSCLC