Atezolizumab (Tecentriq®) was approved by the US Food and Drug Administration (FDA) for the treatment of certain cases of metastatic non-small cell lung cancer (NSCLC), according to a news statement from Genentech.1

Atezolizumab is a monoclonal antibody designed to bind with the PD-L1 protein expressed on tumor cells and tumor-infiltrating immune cells. It enables T cell activation by blocking the interactions of PD-L1 with both PD-1 and B7.1 receptors.

The immunotherapeutic agent is indicated for patients with NSCLC whose disease progressed during or following treatment with platinum-containing chemotherapy, and cases of tumors with EGFR or ALK gene abnormalities in which disease progressed despite treatment with an appropriate FDA-approved targeted therapy. FDA approval is based on the results of the phase 3 OAK and phase 2 POPLAR studies.

OAK is a global, multicenter, open-label, randomized, controlled phase 3 study that evaluated the efficacy and safety of atezolizumab compared with docetaxel in 1225 people with locally advanced or metastatic NSCLC whose disease progressed following treatment with platinum-containing chemotherapy, with a primary analysis consisting of data from the first 850 randomized patients.

In terms of side effects, the most commonly reported effects (20% or more of participants) among patients with metastatic NSCLC were fatigue, decreased appetite, dyspnea, cough, nausea, musculoskeletal pain, and constipation. Nine patients (6.3%) in the atezolizumab group experienced pulmonary embolism, pneumonia, pneumothorax, ulcer hemorrhage, cachexia secondary to dysphagia, myocardial infarction, or large intestinal perforation which led to death. Atezolizumab was discontinued due to adverse reactions in 6 of 142 patients (4%).

Atezolizumab may cause fertility problems in females. Women of child-bearing potential should use an effective contraception during treatment and for 5 months after receiving the last dose.

More than 15 clinical trials in lung cancer, including seven phase 3 studies in previously untreated (first-line) lung cancer, to evaluate the use of atezolizumab alone and in combination with other medicines, as part of the development program for atezolizumab. 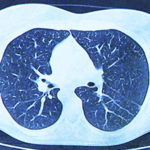 First-line Pembrolizumab + Chemo Could Be Effective for Non-squamous NSCLC