The addition of bevacizumab to first-line treatment with cisplatin plus etoposide significantly improved progression-free survival, but not overall survival, with an acceptable toxicity profile in patients with extensive-disease small-cell lung cancer (SCLC), a study published in the Journal of Clinical Oncology has shown.1

However, researchers found no significant difference in the risk of death between the 2 treatment arms (hazard ratio [HR], 0.78; 95% CI, 0.58-1.06; P = .113). Median overall survival was 8.9 months with cisplatin plus etoposide vs 9.8 months with chemotherapy plus bevacizumab; 1-year survival rates were 25% and 37%, respectively.

There were no statistically significant differences in the rates of hematologic toxicities between the arms, but hypertension was significantly more frequent in the bevacizumab arm (P = .057).

Although treatment with bevacizumab added no apparent survival advantage, the finding that adding immunotherapy improved progression-free survival suggests that further studies with novel and better antiangiogenic agents in extensive-disease SCLC are warranted. 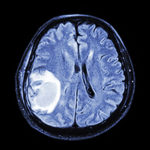