Profile of Tivantinib and its Potential in the Treatment of Hepatocellular Carcinoma: The Evidence to Date - Oncology Nurse Advisor

Tivantinib is an oral, highly selective, non-ATP competitive inhibitor of c-MET receptor tyrosine kinase.14 The MET proto-oncogene was initially discovered in human osteosarcoma, and it encodes for cellular mesenchymal–epithelial transition factor (c-MET).15 c-MET and hepatocyte growth factor (HGF), its only known ligand, are necessary for normal embryonic development and tissue repair; however, their expression is normally very low and only found in cells of epithelial or mesenchymal origin.16–18 When HGF binds to c-MET, there is activation of multiple metabolic pathways, including the mitogen-activated protein kinase, protein kinase B, mammalian target of rapamycin, phophatidylinositol 3-kinase and focal adhesion kinase, which can lead to tumor growth, proliferation, cell invasion and distant metastasis (Figure 1).19–21 Upregulation of the c-MET pathway is found in multiple cancers, including HCC, where it is present 20–40% of the time and is associated with increased risk for metastases and poor prognosis.22,23 HGF is also over-expressed in HCC, which results in increased hepatic regeneration and suppression of hepatocyte apoptosis.24,25 Similarly, livers with HCC have been shown to have high levels of mitogen-activated protein kinase, which can go on to activate the Raf/MEK/ERK signaling pathway, leading to unopposed cellular proliferation, migration and survival.25,26 The inhibition of c-MET by tivantinib disrupts the deregulated signaling cascade, promotes apoptosis and inhibits cellular growth in those cells that express c-MET. 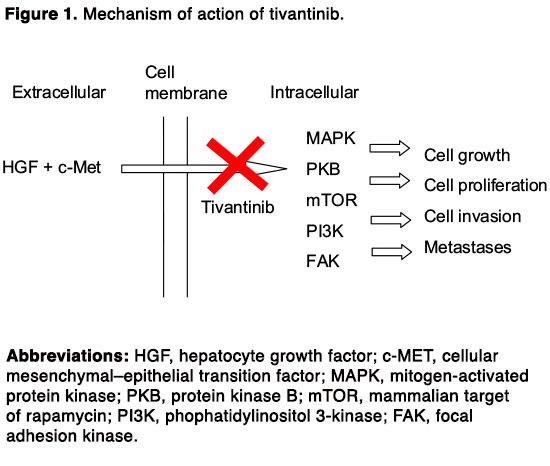 Munshi et al14 demonstrated the selectivity of tivantinib by showing that tivantinib inhibited only four of 229 human kinases with a Ki for c-MET of 355 nmol/L. It was noted that while a Ki of 355 nmol/L is less than that of other available c-MET inhibitors, cellular assays demonstrated similar biochemical potency. Tivantinib targets the inactive, unphosphorylated form of c-MET, locking it in the inactive configuration and preventing downstream signaling.27 Controversy does exist regarding the mechanism of action of tivantinib and whether c-MET inhibition is the major anti-tumor effect of the drug. Several studies have shown that tivantinib possesses cytotoxic activity, even in cells that lack c-MET.28–32 Other proposed mechanisms include microtubule, glycogen synthase kinase 3, cyclin B1 and proteasome inhibition. Microtubule inhibition is the most widely theorized alternative mechanism of action, with three independent in vitro studies corroborating this hypothesis.29–31 Significant challenges to this alternative hypothesis have been raised. Notably, in vivo studies have not documented evidence of neurotoxicity, which is known to be a major adverse effect of microtubule inhibitors.23 Similarly, tivantinib has demonstrated only minimal, if any, response in patients who have tumors with low levels of MET expression, while those tumors with high levels of MET have had the most profound responses to the drug.33,34

From a pharmacokinetic standpoint, tivantinib has an oral bioavailability of >20%, with a half life of 29 minutes. It is metabolized by the CYP2C19 and CYP3A4 pathways, with 19% elimination via the kidneys and 68% via the stool.35 Possible drug interactions could occur with known CYP2C19 inhibitors, such as clopidogrel, esomeprazole, fluconazole, fluoxetine and omeprazole, or with known CYP2C19 inducers, such as carbamazepine, phenytoin and rifampin. Maximum inhibition of c-MET is obtained after just 24 hours of treatment, and this effect is sustained for 12 hours after the drug is withdrawn.36