To determine the efficacy of nilotinib in this patientpopulation, the rate of major molecular response at12 months was used as the study’s primary end point.5 Themolecular response was assessed for bcr-abl by real-timeQRT-PCR assay at baseline, monthly for the first 3 months,then every 3 months.5 The primary end point was establishedby a bcr-abl transcript level ≤0.1% in peripheral bloodon QRT-PCR assay on the International Scale, whichcorresponds to a reduction of 3-log10 copies or more inbcr-abl transcripts.5 The rate of complete cytogeneticresponse by 12 months was the main secondary end pointof the study; disease progression to the accelerated phaseor blast phase was also evaluated.5

Eligible patients included those diagnosed with Ph+ CMLin the chronic phase within the previous 6 months; noprevious treatment for CML, with the exception of anagrelideor hydroxyurea, was allowed. The diagnosis needed to beconfirmed by a cytogenetic analysis; a diagnosis by usingthe FISH procedure was not allowed. An Eastern CooperativeOncology Group (ECOG) performance status score of atleast 2 and adequate organ function were also required.5

Study patients were randomized in a 1:1:1 ratio to receiveone of the following5:

Patients were allowed to discontinue therapy for differentreasons, including evidence of treatment failure (ie, diseaseprogression) or intolerable side effects. Dose escalation ofimatinib to 400 mg twice daily was permitted in patientsshowing a suboptimal response or treatment failure; nodose escalations were allowed for patients receivingnilotinib.5 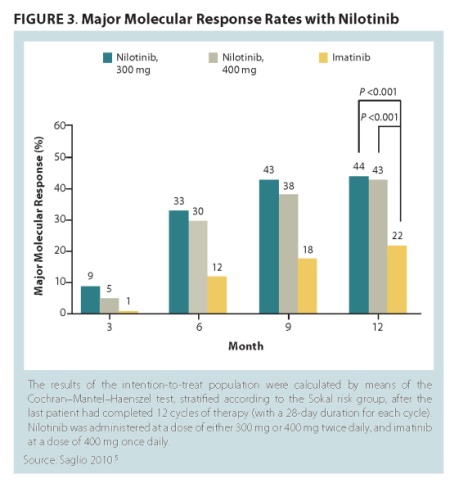 As noted in Figure 3, the major molecular response rateswere also higher in both nilotinib groups, when comparedto the imatinib group, at 3, 6, and 9 months.5 Additionally,the bcr-abl transcript level was ≤0.0032% (approximately4.5-log10 reduction) on the International Scale in 13% and12% of patients receiving nilotinib 300 mg and 400 mg,respectively, compared to 4% of patients receivingimatinib.5

Complete cytogenetic response rates were also significantlydifferent between imatinib and nilotinib; results showed80% and 78% of patients in the nilotinib 300 mg and400 mg groups, respectively, had a complete cytogeneticresponse, compared to 65% of patients receiving imatinib(P<0.001 for both comparisons) (Figure 4).5 Diseaseprogression to the accelerated phase or blast phase occurredin 11 (4%) patients receiving imatinib, 2 (<1%) patientsreceiving nilotinib 300 mg, and 1 (<1%) patientreceiving nilotinib 400 mg (P=0.01; P=0.004, respectively).5 None of the patients who achieved a majormolecular response showed evidence of progression to theaccelerated phase or blast phase; however, 3 patientsreceiving imatinib did have disease progression despiteachieving a complete cytogenetic response.5 Throughout the study, both nilotinib and imatinib hadfavorable safety and adverse event profiles; overall, grade3 or 4 nonhematological events were uncommon. Nausea,diarrhea, vomiting, muscle spasms, and edema occurred athigher rates in the imatinib group than in the nilotinibgroups; rash, headache, pruritus, and alopecia were reportedat higher rates in the nilotinib groups than in the imatinibgroup.5 With regard to hematological events, grade 3 or 4 neutropenia (20%) and anemia (5%) were more common in the imatinib group, whereas thrombocytopenia (10% [300 mg]; 12% [400 mg]) occurred more frequently in both nilotinib groups; all new grade 3 or 4 hematological abnormalities occurred within the first 2 months for all groups.5 None of the patients among the 3 study groups showed evidence of QT prolongation >500 msec or a change in the mean left ventricular ejection fraction from baseline.5

Approximately 5% and 9% of patients receiving nilotinib300 mg and 400 mg, respectively, discontinued the studydue to adverse events, compared to 7% of those receivingimatinib.5

Overall, the results of this study demonstrated thatnilotinib was superior to imatinib with tolerable adverseevents; both major molecular response and complete cytogeneticresponse, the primary and secondary end points,respectively, were significantly higher with nilotinibcompared to imatinib. These therapeutic milestones areimportant, particularly in newly diagnosed patients, as theyare predictors of the treatment prognosis; in this study, theycorrelated with the significantly lower disease progressionor transformation rates seen in the nilotinib groups, whencompared to the imatinib groups, thereby confirming thattwice-daily nilotinib, at both 300 mg and 400 mg doses,is superior to imatinib in newly diagnosed patients withPh+ CML.5 Additional follow-up, comprised of monitoringof patients in this study for up to 24 months, is ongoingand will provide more information about potential longtermadvantages, disadvantages, response durability, andadverse events associated with nilotinib therapy.5

Case 1: Use of Nilotinib in a Treatment-Naïve Patient