Robotic radiosurgery (RRS) was safe and effective for treating metastases of renal cell carcinoma (RCC) in a study that involved a highly selected group of patients, according to a presentation at IKCS Europe 2022.

The study cohort included 50 patients with lung metastases, 44 with visceral metastases, and 16 with lymph node metastases who underwent image-guided RRS. Indications for treatment included oligometastatic disease defined as 5 or fewer lesions and oligoprogressive disease or limited systemic treatment options. At the time of the procedure, patients had a median age of 64 years. Of the 110 patients, 102 presented with clear cell RCC, 1 had papillary type 1, 3 had papillary type 2, and 3 had chromophobe histology, and 1 patient had a RCC with TFE3 translocation.

Adverse events (AEs) were limited to grade 1 or 2, although 1 patient experienced a grade 4 stroke and thrombosis. The most frequent AE was fatigue (8 patients), followed by pneumonitis (2 patients). 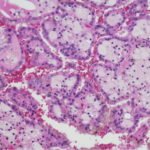