Patients with low potassium levels may be more likely to develop atrial fibrillation after undergoing autologous hematopoietic stem cell transplantation (HSCT). Researchers have known that other factors, including elevated baseline serum creatinine levels, increased age at the time of transplant, and cardiac risk factors such as a history of cardiac arrhythmia, can increase the risk of atrial fibrillation after HSCT. Now they are learning that hypokalemia seems to play a role in the onset of atrial fibrillation not just in the immediate recovery period but perhaps even beyond 1 year following transplantation. These findings from a retrospective cohort study were recently published in the Journal of Hematology Oncology Pharmacy.

A team of researchers analyzed the records from 273 patients who had undergone autologous HSCT at the Avera McKennan Hospital & University Health Center in Sioux Falls, South Dakota, between November 2007 and November 2018. They obtained the records from the hospital’s electronic medical records system, and created 2 groups: a control group of 245 patients who did not experience atrial fibrillation after transplantation and a cohort of 28 people whose record showed they experienced atrial fibrillation in the hospital after undergoing HSCT.

The patients who developed atrial fibrillation post-HSCT also had a higher incidence of sepsis, higher admission rates to the intensive care unit, and longer hospital stays.

When the researchers analyzed the records of 15 patients for whom there was 1-year follow-up data, they also discovered that 7 of them remained in persistent atrial fibrillation or had a recurrence during that year.

This study’s findings may guide oncology teams in planning more aggressive posttransplant care for their patients. The researchers suggest that patients who undergo HSCT could benefit from a thorough cardiovascular evaluation and outpatient monitoring for atrial fibrillation. Patients may also need to undergo careful electrolyte monitoring during the posttransplant time period. 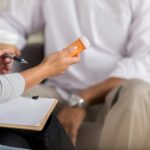