Patients with chronic or persistent immune thrombocytopenic purpura (ITP) may achieve similar overall response rates (ORR) once treated with hydroxychloroquine, danazol, or dapsone, according to study findings published in Medicine.

Corticosteroids are the first-line therapy in patients with ITP, and in cases of corticosteroid dependence, is followed by splenectomy as a second-line option. Splenectomy often produces favorable outcomes, with an ORR of 60% to 80%, but 15% to 40% of patients relapse or remain refractory, indicating a need for more treatment options in the second-line or third-line setting.

For this retrospective analysis, researchers identified 28 studies that included a total of 415 patients with persistent or chronic ITP who were treated with second-line dapsone, danazol, interferon-alpha, and hydroxychloroquine. The primary outcome was pooled ORR, and secondary outcomes were complete response rate (CRR) and partial response rate (PRR).

In the 8 studies that investigated interferon-alpha, 83 patients received 3 million units subcutaneously 3 times a week during 4 to 12 weeks with the exception of 2 studies. The ORR was found to be 42%, CRR was 18%, and PRR was 37%. Patients who had undergone splenectomy were correlated with an improved ORR (P =.02).

One study evaluated the effect of hydroxychloroquine 200 to 600 mg daily among 28 patients. ORR was 50%, but data to determine CRR or PRR were not available.

The rate of adverse effects was 73%, 51%, 30%, and 0% among patients who received danazol, dapsone, interferon-alpha, and hydroxychloroquine, respectively.

Dapsone, danazol, and hydroxychloroquine demonstrated similar ORRs of 50% to 60% as second-line treatment of ITP, and their low CRRs suggest a beneficial treatment outcome in patients with high risk of infection or low risk of bleeding. Of these treatments, dapsone and hydroxychloroquine should be preferred over danazol and interferon-alpha in patients with antinuclear antibodies based on their safety and efficacy profiles, the authors conclude. 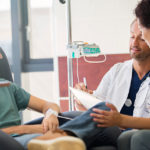