Abstract: Ocular sebaceous carcinoma (SC) is an exceedingly rare but aggressive malignancy that can impair patients’ visual acuity or even cause tumor-specific mortality. This tumor usually mimics chronic benign eyelid lesions, thus leading to delayed diagnosis, thereby causing high recurrence and metastasis. Ophthalmologists should be more aware of SC in order to offer correct diagnosis and treatment at the onset of symptoms. Prompt surgical excision with frozen section margin control is the mainstay of SC management after patient evaluation and accurate biopsy. Mohs micrographic surgery has been associated with better tumor control outcomes than wide local excision. Radiation therapy should be considered as adjuvant treatment for locally advanced (stage T3a or higher) or high-risk (pagetoid spread) SC, nodal metastasis, or palliative care. Cryotherapy and topical chemotherapy are used for pagetoid spread. Targeted therapy has an emerging role in more complicated cases. For lymph node and distant metastasis, combination treatments should be provided, including lymph node and neck dissection, radiation therapy, systemic chemotherapy, and even orbital exenteration. The rarity of ocular SC precludes a comprehensive perspective on standard treatment. This paper offers a brief review of recent advances in the clinical diagnosis and management of ocular SC based on current scientific literature.

Sebaceous carcinoma (SC) is a rare malignancy that is challenging even for experienced ophthalmologists and dermatologists to recognize and cure successfully. Early diagnosis and prompt surgery may improve treatment outcomes. Advances have been achieved over the past several decades even though the current literature contains only small- to medium-sized case reports. This review summarizes the demographics, etiology, clinical presentation, and pathology of ocular SC with a special emphasis on the diagnosis and management.

SC is frequently regarded as either ocular or extraocular. SC occurs more frequently in the head and neck, and the ocular region is the most common site, accounting for 34.5%–59% of cases.1–5 However, the latest study on the incidence and survival of SC in the USA reported a significantly lower ratio of ocular SC (25.8%).6 SC is considered a relatively rare tumor of the eyelid, accounting for approximately 5% cases of malignant eyelid tumors in the USA7 and 7.9% in Taiwan.8 It is the third most common eyelid malignancy after basal cell carcinoma (BCC) and squamous cell carcinoma (SCC). In Asian populations, SC is generally considered to be as prevalent as or more common than BCC, accounting for 28%–60% of all eyelid malignancies.7 However, Dasgupta et al1 found a significantly higher incidence of SC among whites (2.03 per million) than Asian/Pacific Islanders (1.07 per million) in the USA. The most likely explanation for this is the relatively low incidence of other eyelid skin tumors rather than Asian predominance.

Ocular SC is a disease of elderly patients, especially females, with mean patient age ranging from 70 to 72 years.6,9,10 However, this gender association has been questioned, as a review of 1,349 US cases in the Surveillance, Epidemiology, and End Results database found a slight predominance of men (54%).1

Tumors of sebaceous glands in the ocular region originate in the meibomian glands, glands of Zeis, caruncle, and skin of the eyebrow.11 The upper eyelid is the most common site of SC due to the dense concentration of meibomian glands.12,13 Lesions involving both the lower and upper eyelid occur simultaneously in 1%–6% of patients.14 In exceedingly rare cases, the lacrimal gland has not only been shown to be a target of tumor invasion but also a source of primary SC with higher mortality than other locations.15 Another aggressive feature of SC is multicentricity, which can be detected in a small percentage of patients with a high risk of local recurrence.9,12,16 In addition, intracranial involvement can be seen in rare cases.7,17

Despite the aggressive nature and poor outcomes of SC, little is known about its etiology and tumorigenesis. Possible risk factors for SC, except for the older patient age and female sex, include prior irradiation, immunosuppression, genetic predisposition for Muir–Torre syndrome,18,19 production of nitrosamines, and photosensitization from previous diuretic use.5,11

As for genetic changes, p53 dysregulation has been observed in a large proportion of patients.21,22Human epidermal growth factor receptor 2 (HER2) amplification23 and epigenetic changes, such as hypermethylation of the CDKN2A promoter,24 have more recently been implicated in the development of SC. The latter finding has been correlated with ocular SC onset at an earlier age. Based on the results of whole-exome next-generation sequencing of 27 SCs, Tetzlaff et al25 found 139 nonsynonymous somatic mutations in ocular SCs with TP53, RB1, PIK3CA, PTEN, ERBB2, and NF1 as the most common mutations. These mutations were predicted to activate the PI3K signaling cascade, which implicates PI3K pathway activation as an important driver in ocular SC. 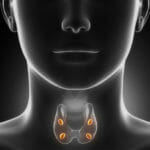