Transoral robotic surgery (TORS) with or without radiation therapy or chemotherapy is an effective treatment option for patients with oropharyngeal cancer regardless of their p16 status, according to a study presented at the 2016 annual meeting of the American Academy of Otolaryngology – Head and Neck Surgery.1,2

TORS is performed using the da Vinci Surgical System. The arms of the da Vinci access and remove the tumor through the mouth, sparing the patient visible scarring and preserving speech and the ability to eat.

In this study, researchers at Henry Ford Hospital in Detroit, Michigan, sought to evaluate the effectiveness of TORS in patients with oropharyngeal cancer, including 3-year survival and cancer control and metastasis. They also investigated the effect of p16 status on these variables.

For this study, results for 53 patients with oropharyngeal cancer treated at Henry Ford Hospital were analyzed. Of the patients, 83% were male, 77% were white, and mean age was 60.8 years. Therapy modalities included TORS alone (37%), TORS with radiation therapy (11.4%), and chemotherapy and radiation therapy (50%).

Although these results are not strong enough to influence clinical practice, the study demonstrates that TORS with or without radiation therapy or chemotherapy is a viable treatment option for patients with oropharyngeal cancer regardless of their p16 status, the researchers concluded. 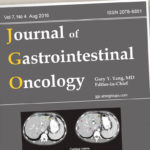 Outcomes in Patients With Brain Metastasis from Esophageal Carcinoma