Promising results were observed in a small, single-arm, phase 2 study evaluating the efficacy and safety of the programmed cell death-1 (PD-1) inhibitor, pembrolizumab, plus radiation therapy (RT) in patients with locally advanced head and neck cancers who were ineligible to receive cisplatin-based chemoradiation therapy. These findings were presented during the 2020 Multidisciplinary Head and Neck Cancers Symposium in Scottsdale, Arizona.

Cisplatin-based chemoradiation therapy is considered a standard of care for the treatment of locally advanced squamous cell carcinoma of the head and neck (LA-HNSCC), with cisplatin acting as both a chemotherapeutic agent and a sensitizer to ionizing radiation. However, it is not uncommon for patients to have contraindications to the receipt of cisplatin therapy, thereby necessitating selection of another radiosensitizer for concomitant use with RT.

The choice of pembrolizumab as a substitute for cisplatin in the setting of LA-HNSCC was based, in part, on previous studies showing that “radiation elicits and promotes tumor-directed immune-stimulation, which may potentiate anti–PD-1 therapy,” the study authors commented.

None of the 29 adult patients enrolled in this study (ClinicalTrials.gov Identifier: NCT02609503) had undergone prior curative treatment for LA-HNSCC, and an Eastern Cooperative Oncology Group (ECOG) performance status of 0 or 1 was a study inclusion criterion. Pembrolizumab was administered concurrently with RT every 3 weeks for 3 cycles followed by 3 cycles of pembrolizumab. The primary study endpoint was progression-free survival (PFS), with overall survival (OS) and safety included as secondary study endpoints.

Twenty patients had cancers of the tongue or tonsil, with a variety of other sites of disease, including supraglottic larynx and hypopharynx, present in the remaining patients. Nonmetastatic stage III or IV disease was present in approximately three-quarters of study patients. Reasons for ineligibility to receive cisplatin included otopathology (69.0%), nephropathy (20.7%), and neuropathy (6.9%).

One-year rates of PFS and OS for the overall study population were 76% and 86%, respectively. Furthermore, at a median follow-up of 21 months, the median PFS had not been reached and exceeded the hypothesized median PFS of 16 months, leading study authors to conclude that this approach “deserves evaluation in a randomized trial.”

While respective 1-year PFS and OS rates were 88% and 94% for patients with p16/human papilloma virus (HPV)-positive cancers of the oropharynx, the corresponding rates were 58% and 75% for those with other type of LA-HNSCC.

Toxicities frequently associated with administration of RT were observed, although grade 3 or grade 4 lymphopenia was observed in over half of the study patients.

In their concluding remarks, the study authors stated that “concurrent pembrolizumab and radiotherapy has demonstrated promising PFS and OS in LA-HNSCC, regardless of p16 status or anatomic location, with a favorable toxicity profile.”

Disclosure: Some of the authors of the abstract disclosed financial relationships with pharmaceutical companies, medical device companies, and/or health-related companies. For a full list of disclosures, please refer to the abstract. 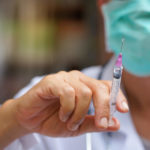