Recurrence following initial treatment appears in 10–13% of patients; >70% of failures appear in the vagina but an extrapelvic failure can be detected in >75% of the relapsed patients.16 Hematogenous metastases have been reported in 6–10% of patients,17 the lungs being the most common site (2–8% of EC patients). A review carried out in Poland of 1610 patients found 134 hematogenous metastases in 110 patients with stages I and II. Sites of metastases were the lungs (69 metastases), liver (32 metastases), bones (23 metastases) and brain (10 metastases).18 These figures can increase up to 24% in patients with unfavorable histologies, such as clear-cell (CC) carcinoma.19 A total of 10% of patients who died from their EC had disease in the pelvis, 37% had in the abdomen (liver metastases accounted for 35% of these) and 53% had at distant places (lungs hosted metastases in 78% of these patients).20 Prospective studies have demonstrated a decrease in local relapses with postoperative radiotherapy, either external beam radiotherapy (EBRT) or vaginal cuff brachytherapy (VCB), but results have not translated to a survival advantage. Nevertheless, these randomized studies have not been powerful enough to detect it. Analyses of the large National Cancer Database (NCDB), which collects data from >1500 facilities in the US, showed a survival benefit among patients at high-to-intermediate-risk and high-risk patients treated with postoperative radiotherapy.21 The analyses of >132000 patients showed up to a 22% decrease in mortality risk in these patient groups, and postoperative irradiation was an independent factor for overall survival in a multivariate analysis. Data from the Surveillance, Epidemiology, and End Results (SEER) database have shown an improvement in survival with EBRT or VCB among intermediate- patients and high-risk patients without lymph node dissection,22,23 but a further analysis of 58.172 patients included in the SEER database failed to demonstrate an improvement in cancer-specific mortality.24 Additionally, smaller population-based reports, like the Danish population-based study, also failed to demonstrate improvement in survival.25 These doubts about survival have raised the need for evaluating the costs of VCB. Postoperative VCB cost for intermediate-risk EC patients was USD 38764/life saved,26 which is less than the value generally considered the acceptable cutoff for intervention (USD 50000/life saved).

Owing to the increasing trend for using VCB, reported from the SEER data,27 it is a good idea to describe patient selection and technical issues related with VCB in EC, some of which are not usually addressed. The manuscript is focused on high-dose rate (HDR) because nowadays only 3.8% of the US radiation oncologists use low-dose rate (LDR). VCB reviews usually summarize patient selection and group description because VCB is regarded as a simple and easy technique that is generally well tolerated.28 Instead, we dealt in-depth with patient and technical issues, not usually covered in other critical reviews, such as body mass index, patient position, applicator position or rectum and bladder filling, among others.29–33 Several of these issues have not been covered in the recent American Brachytherapy Task Group Report.34

Clinicopathological findings define the risk for disease relapse and guide indications for postoperative treatments. Indications include age, International Federation of Gynecology and Obstetrics (FIGO) stage, histological type, depth of myometrial invasion, pathological grade and lymphovascular space invasion (LVSI), and some guidelines add tumor size to this list when recommending adjuvant radiation. Several risk groups have been proposed that do not match completely (Table 1). American Society for Radiation Oncology (ASTRO)/American Society of Clinical Oncology (ASCO) guidelines provide the simpler definition of a high-to-intermediate-risk group.35 In a randomized trial of low-risk patients, only 4% of the overall group relapsed, suggesting that they would not benefit from adjuvant irradiation.36 Intermediate-risk patients, however, can benefit from postoperative radiotherapy. Three large randomized trials10,37,38 have demonstrated a reduction in pelvic and local relapses, 70% of which appear in the vaginal vault, and failed to improve survival (Table 2). A Cochrane meta-analysis determined that EBRT produced an absolute risk reduction of locoregional recurrences of 6%, meaning that one locoregional relapse is prevented in every 16.7 treated patients.39 Sorbe et al40 also have demonstrated that VCB provides similar tumor control than EBRT at lower toxicity and, thus, a better quality of life. The VCB arm was associated with significantly less diarrhea, fecal leakage, need of the toilet and less limitation in daily activities. Table 3 shows the National Comprehensive Cancer Network (NCCN) guidelines for postoperative radiotherapy. Irradiation in stage III/IV has been less studied; a retrospective SEER analysis of 1577 patients demonstrated higher 5-year overall survival with the addition of EBRT or EBRT + VCB (surgery 40%, EBRT 56%, EBRT + VCB 65%).41 Results from the NCDB have shown that VCB improves survival among women with stage IA.42 Results from the same database show that the addition of VCB to EBRT improves survival in stage III patients with cervical involvement (hazard ratio 0.86).43 Results from the SEER database show that among stage I patients graded into PORTEC-risk groups, there is a significant improvement in survival in high-to-intermediate- and high-risk patients irrespective of the irradiation technique.21 Analysis of this database also shows an improvement in survival with postoperative irradiation among intermediate- and high-risk patients.22 Discrepancies between randomized and database studies are due to including low-risk patients who die from EC and due to a lack of power in the randomized trials. It has been calculated that 2115 patients in each arm are necessary to carry out a powered enough assay.21 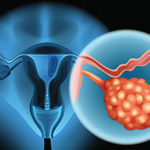