Women with stage II-IV low-grade serous carcinoma of the ovary or peritoneum who took hormone maintenance therapy (HMT) after primary therapy experienced significantly longer progression-free survival (PFS) than did women who underwent routine observation. These results indicate the need for a prospective trial.1

“On the basis of our clinical experience, LGSC [low-grade serous carcinoma] does not seem to be completely resistant to platinum-based chemotherapy,” wrote the researchers.

“Furthermore, in the absence of prospective data indicating otherwise, we continue to recommend platinum plus taxane chemotherapy to women with newly diagnosed stage II to IV LGSC after primary cytoreductive surgery.”

Researchers examined data from patients with stage II-IV low-grade serous carcinoma who were treated with primary surgery followed by platinunum-based chemotherapy and had at least 2 years of follow-up with no recurrence of disease and had sufficient clinical information.

From 1982 to 2013, 203 eligible patients were seen at University of Texas MD Anderson Cancer Center, Houston, Texas. Of these, 70 received HMT and 133 underwent standard observation. 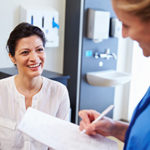