In a recent review article published in Thrombosis Journal, Wei Xiong, MD, PhD, of the Department of Pulmonary and Critical Care Medicine at Xinhua Hospital in Shanghai, China, outlined the current state of knowledge regarding venous thromboembolism (VTE) in association with cancer and treatments for this condition.

“Cancer-associated VTE is an important cause of morbidity for patients with cancer,” Dr Xiong wrote in the report. VTE is 4 to 7 times more common in patients with cancer than in those without cancer, which may be attributed to factors such as cancer type and anticancer treatment, according to Dr Xiong’s review.

VTE associated with cancer may involve treatment oriented to any of several phases, such as during the initial period of usually the first 5 to 10 days, within 6 months, beyond 6 months, and during VTE recurrence or other situations.

Multiple aspects of therapy have to be considered, including decisions around whether to embark on a course of therapy, choice of agent and possible adjuvant therapy, duration of treatment, and treatment adjustments. Special circumstances may warrant particular considerations.

LMWH has an established efficacy and safety profile, but direct oral anticoagulants (DOACs) have also demonstrated promise therapeutically. Recent research has shown DOACs to be linked to lower rates of 6-month recurrent VTE than seen with LMWH when given in earlier stages of treatment, Dr Xiong noted in the review.

For cancer-associated VTE treatment after 6 months, LMWH may be superior to a vitamin K antagonist (VKA) in reducing VTE risk, and DOACs may be associated with greater risk of major bleeding. However, conflicting results appear to exist regarding bleeding risk with DOACs. For treatment of recurrent VTE in patients with cancer, LMWH appeared to be more successful at reducing further VTE recurrence than a VKA was, according to research described in the review.

“The future direction of treatment of cancer-associated VTE should be focused on how to reduce its recurrence as well as all-cause mortality without bringing much risk, adverse events or discomfort to patients,” Dr Xiong concluded in the report. 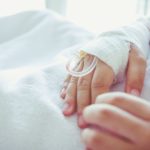